BY Heather Hughes on April 22, 2019 | Comments: one comment
Related : Soap Opera, Spoiler, Television, The Young and the Restless 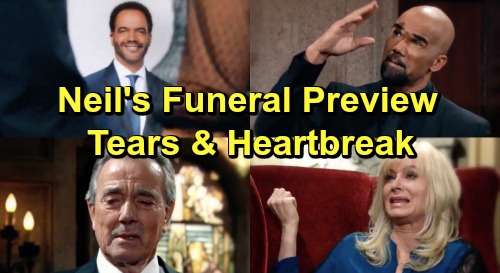 The Young and the Restless (Y&R) spoilers preview for the week of April 23-26 tease that a shocking loss will leave Genoa City reeling. Devon Hamilton (Bryton James) will discover Neil Winters (Kristoff St. John) lifeless at the penthouse on Tuesday. He’ll realize there’s no hope, so he’ll have to go share this heartbreaking news with the rest of his family.

Lily Ashby (Christel Khalil) will face some especially strong grief. She just got out of prison, so she was undoubtedly hoping to spend more time with Neil. The fact that she missed these last few months will make it even harder to face the loss.

Lily will even blast Dr. Nate Hastings (Sean Dominic) for not realizing Neil could’ve had a medical issue. She’ll feel like there must’ve been a way to prevent this, but it was just one of those unfortunate blows. Once Neil’s family has been filled in, it’ll be time to move on to his friends. Y&R viewers will see some crushing reactions to Neil’s passing.

The Young and the Restless spoilers say Nikki Newman (Melody Thomas Scott) will credit Neil with saving her life. Without his support over the years, Nikki won’t be sure she would’ve survived. Jack Abbott (Peter Bergman) and Victor Newman (Eric Braeden) will also get emotional over Neil’s death. They’ll put their differences aside as they honor the life Neil lived and the love he had for others.

Ashley Abbott (Eileen Davidson) will also break down in tears as she processes all this. She’ll admit she always expected Neil to be there. These two were on the verge of a romance when Ashley abruptly left for Paris, but they agreed to remain friends. Ash may find herself wondering what might’ve been, and she’ll definitely know she’s going to miss Neil’s kind heart.

Nick Newman (Joshua Morrow), Victoria Newman (Amelia Heinle), Abby Newman (Melissa Ordway) and so many others will show their support at Neil’s funeral. Malcolm Winters (Shemar Moore) will also be on hand to deliver a difficult eulogy. He won’t even want to think about a world without Neil in it, but Neil would want them all to carry on and keep joy alive.

The Young and the Restless’ weekly promo promises some gripping funeral scenes. As Jack notes in the preview, Neil didn’t just touch lives; he saved lives. It’s important to remember the legacy of both Neil and the fantastic actor who portrayed him. Y&R will have a truly special sendoff, which will wrap up with a tribute to Kristoff St. John on April 29.

This is sure to be a tough goodbye for fans and look at the preview shows that it was even tougher for Kristoff St. John’s costars. We’ll give you updates as other Y&R details emerge. Stay tuned to the CBS soap and don’t forget to check CDL often for the latest Young and the Restless spoilers, updates and news.