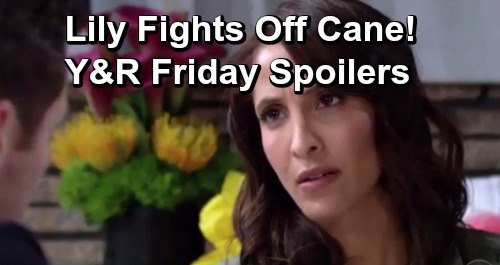 The Young and the Restless (Y&R) spoilers for Friday, April 19, tease that Abby Newman (Melissa Ordway) will have a lot on her plate. She’ll be working hard to put the finishing touches on the new restaurant and get ready for opening night. Unfortunately, a major crisis will pop up at the last second. Abby will be forced to undo some damage and hope her shining moment can still be salvaged.

Of course, Abby will undoubtedly succeed. She’s a real go-getter and has been building toward this big debut for months. Abby wants to show Genoa City its hottest new eatery, so she’ll open the doors to “Society” soon enough.

The Young and the Restless spoilers say it’ll be a big day for Cane Ashby (Daniel Goddard) as well. He’ll make some special arrangements for Lily Ashby’s (Christel Khalil) homecoming, but he’ll have to be sneaky about it. Lily is done fighting for their marriage, so she won’t even want to see Cane. Neil Winters (Kristoff St. John) and the twins will pick Lily up offscreen so she can avoid Cane entirely.

However, Y&R fans know how determined Cane can be. He’ll get Neil to take Charlie Ashby (Noah Alexander Gerry) and Mattie Ashby (Lexie Stevenson) out for a while. That’ll give Cane a chance to make one last pitch to Lily. She won’t be impressed by his spa setup at home. Lily will argue that she just wants to change clothes, attend Abby’s restaurant opening and get out of town.

Cane will buy himself some time by suggesting that they attend opening night together. He’ll contend that everyone will ask questions if Lily attends alone, which would take the spotlight away from Abby. The Young and the Restless spoilers say Lily will agree to go with Cane, but she won’t want him to get the wrong idea. She’ll stand by her decision to divorce and seek a fresh start elsewhere.

Nevertheless, Cane will try to charm Lily a bit and make her remember what they used to share. He’ll plead for one more shot at being the man she fell in love with, but things aren’t looking hopeful right now! We’ll give you updates as other Y&R news comes in. Stay tuned to the CBS soap and don’t forget to check CDL often for the latest Young and the Restless spoilers, updates, and news.