The Young and the Restless Spoilers: Friday, August 16 Recap – Lola’s Father Shows Up as Wedding Begins – Summer Suffers Through Vows 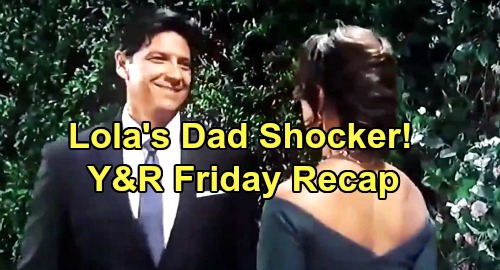 The Young and the Restless (Y&R) spoilers for Friday, August 16, tease that Phyllis Summers (Michelle Stafford) will face a shocker. She’ll be taken aback to learn Summer Newman (Hunter King) will be attending Kyle Abbott’s (Michael Mealor) wedding. Phyllis will remind Summer of how much Kyle hurt her, but she’ll admit she did the same to him years ago. She’ll think attending is the right call.

Phyllis will be her daughter’s plus one, so Summer will have some support. Over with Kyle, he’ll get a text from Theo Vanderway (Tyler Johnson) about the end of life as he knows it. Y&R spoilers say Kyle will start to worry about his future. Soon after, he’ll confide in Traci Abbott (Beth Maitland) and Ashley Abbott (Eileen Davidson) about how he can’t do this.

Kyle will feel like failed marriages are the Abbott family way. He’ll believe Lola Rosales (Sasha Calle) deserves forever love with someone who will protect her heart. Ashley and Traci will assure Kyle that he can be that guy for Lola. They’ll give Kyle a solid pep talk and embrace him before he gets ready.

Over with Victoria Newman (Amelia Heinle), she’ll get off a call with Nick Newman (Joshua Morrow) and turn to Billy Abbott (Jason Thompson). He’ll be busy obsessing over Delia Abbott’s (Sophie Pollono) doll, so he won’t hear Victoria for a moment. Once Billy snaps out of it, he’ll insist he’s fine and they’ll head to the wedding.

Other Young and the Restless spoilers say Lola will have some help. Abby Newman (Melissa Ordway), Mariah Copeland (Camryn Grimes) and Tessa Porter (Cait Fairbanks) will all be on hand for the final preparations. Once Lola’s done glamming up, she’ll express gratitude to her friends.

Afterward, it’ll be time for a popular wedding tradition. Lola will need something old, something new, something borrowed and something blue, so she’ll open a few gifts. Mariah’s vintage purse will serve as the old while Ashley’s latest fragrance provides the new. Abby will also let Lola borrow some diamond earrings, and Tessa will offer a blue garter.

After Lola’s group hugs with the other ladies, Rey Rosales (Jordi Vilasuso) will get a sweet scene with his sister. Lola will be thankful for the way Rey stepped up as a role model. She’ll view him as the best big brother she could ever want.

At the Chancellor Pavilion, the wedding guests will begin filing in. Devon Hamilton (Bryton James) and Elena Dawson (Brytni Sarpy) will bump into Billy and Victoria as they arrive. Kyle, Ashley, Traci and Nate Hastings (Sean Dominic) will be next. Jack Abbott (Peter Bergman) will show up next with big news, and we’ll see what he means moments later.

Back with Lola, she’ll be amazed when Celeste Rosales appears. Celeste will be sorry she almost skipped the nuptials, so they’ll embrace and make amends. They’ll agree about forgiving mistakes before Celeste praises the groom. She’ll be glad Lola found someone who adores and celebrates her. As they wrap up their heartwarming chat, Lola will request that Celeste walk her down the aisle with Rey.

Everyone will take a seat as Kyle lets Jack know he’s grateful about Celeste. Phyllis and a heartbroken Summer will watch from the back. After Lola’s wedding march, Celeste will catch someone lurking out of the corner of her eye. It’ll be Lola’s father, Adrian Rosales, so Celeste will stomp over to scold him for showing his face. Adrian will insist he wasn’t going to miss Lola’s big day, which will bring an argument.

The Young and the Restless spoilers say Celeste will finally deliver a warning. She’ll make it clear that Adrian had better not ruin this for Lola. Meanwhile, Kyle and Lola will exchange vows along with the rings. They’ll make it official and share a kiss to seal their newlywed status.

This is sure to be a can’t-miss episode for all you soap wedding lovers out there! We’ll give you updates as other Y&R details emerge. Stay tuned to the CBS soap and don’t forget to check CDL often for the latest Young and the Restless spoilers, updates and news.