BY hellodrdavis on August 2, 2019 | Comments: one comment
Related : Soap Opera, Spoiler, Television, The Young and the Restless 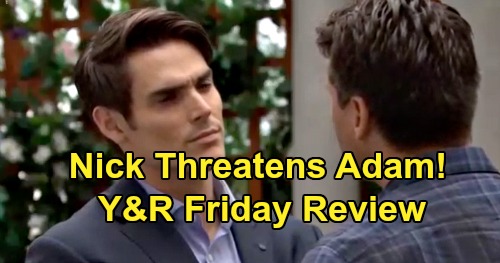 The Young and the Restless spoilers review for Friday, August 2, tease that Victor Newman (Eric Braeden) will experience more complications as a result of his blood disease and ongoing treatments. As Y&R viewers know, Victor’s newest course of treatments are quite potent and come with some pretty serious side effects.

On Friday’s episode, Victor will arrive at Jabot to see Summer Newman (Hunter King) and encounter Jack Abbott (Peter Bergman) instead. After some chiding and banter between Victor and Jack, Summer will arrive, and Victor will talk with her privately. He’ll tell her for the first time about his rare blood disease and that he’s undergoing rigorous treatment. Summer will get emotional, but Victor will assure her that he’s going to fight this disease and win.

Later, as Victor is leaving the Jabot offices, he’ll be in the parking garage when he has some sort of spell. He’ll become dizzy and nearly collapse but he’ll wind up propping himself against a car. With labored breathing, he’ll call Nate Hastings (Sean Dominic), but when Nate doesn’t answer, he’ll call Jack and ask him to come down to the parking garage.

Jack will escort Victor back up to his office. Victor won’t reveal his disease; he’ll just explain that he’s on a new medication that has side effects. Jack won’t press for details. Nate will arrive and examine Victor in private, and he’ll conclude that Victor’s symptoms were most likely caused by low blood pressure, and that he should start making lifestyle changes, like using a driver from now on.

Even though Jack didn’t press the issue in the moment, he’ll probably be even more determined now to find out what’s going on with Victor’s health, which is something that Victor clearly wants to keep private. But with such debilitating side effects from the treatments, he probably won’t be able to keep his condition a secret for much longer – which could affect his ultimate ability to pick the reigns back up at Newman.

Next, on the new episode of Y&R on Friday, August 2, Nick Newman (Joshua Morrow) will start out his day feeling good – he’ll have a visit with Christian Newman (Jamie and Alister Tobias) on the books for later, and he’ll be stoked about his “New Hope” partnership with Devon Hamilton (Bryton James). Nick has stated that he wants to do some good in the world and promote positivity now.

He’ll wind up having a good, albeit short, visit with Christian in Chancellor Park, supervised by Victoria Newman (Amelia Heinle). But things will take a turn when Adam Newman (Mark Grossman) shows up on the scene and starts needling Victoria about going Nick preferential treatment when it comes to visitation. He’ll even take pictures of Nick and Christian to show the judge.

Adam and Nick will then start to argue, and Victoria will take Christian away so he doesn’t witness the scene. The men will toss insults around, each accusing the other of being cruel and

selfish. Nick will refer to Adam as a sociopath and accuse him of playing games. Adam won’t back down and will goad his brother on.

More words will be exchanged, until Nick threatens to play hardball going forward – he’ll say he will destroy Adam until he has nothing left professionally or personally, and that includes Christian and Connor Newman (Gunner and Ryder Gadbois). Adam will egg him on and basically tell him to bring it on and that he loves the game.

So, basically in the end, Nick will succeed only in giving Adam what he seems to really want – a fierce fight. Of course, Adam’s objective seems to be to goad Nick into behaving badly so he can use it against him in court at a later date, and Nick seems to be taking the bait…all after previously vowing to do good things and set a good example for Christian.