The Young and the Restless Spoilers: Monday, August 5 – Nick Loses It on Adam, Beats Up Brother After Christian Threat 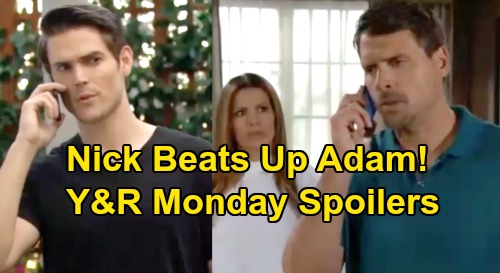 The Young and the Restless (Y&R) spoilers for Monday, August 5, tease that Adam Newman (Mark Grossman) will go to extremes. He’ll test Nick Newman’s (Joshua Morrow) patience once again by threatening to tell Christian Newman he’s his father. Nick will hear Adam’s warning over the phone and give him one right back. He’ll make it clear that Adam had better not say one word about that.

Of course, Sharon Newman (Sharon Case) tries to talk Adam out of the idea in Friday’s episode. She seemingly succeeds, but Adam has a tendency to act on impulse. He does things whenever they can do the most damage, which isn’t the best tactic since a child’s involved here.

On Monday, Nick will worry that Adam’s not going to listen, so he’ll decide to stop his determined brother. That’ll lead to a fierce faceoff, so Y&R fans can expect Adam to take some punches within the next couple episodes. Naturally, Sharon will be the one tending to Adam after Nick’s blows are dealt. A hot “Shadam” love-making session is coming up later this week, August 5 to August 9.

As for Nick, he’ll know Adam might use this against him in the custody case. Nick may realize Adam was intentionally provoking him in hopes that he’d fly off the handle. Even so, The Young and the Restless viewers know Nick struggles to control his temper when it comes to Adam. He just can’t handle his anger once Adam starts pushing his buttons.

Chelsea Newman (Melissa Claire Egan) will do her best to help Nick, but she’ll have her own problems to deal with. She’ll have to decide her next move regarding Connor Newman (soon-to-be Judah Mackey) and his living situation. Connor’s headed back to Genoa City on August 8, so Chelsea will eventually make the tough call to let her son return to town.

The Young and the Restless spoilers say Anita Lawson (Catherine Bach) is also set to make a comeback in the week ahead. Chelsea and Nick’s lives should get pretty messy, so stay tuned to see how they handle the chaos. We’ll give you updates as other Y&R news comes in. Stick with the CBS soap and don’t forget to check CDL often for the latest Young and the Restless spoilers, updates and news.