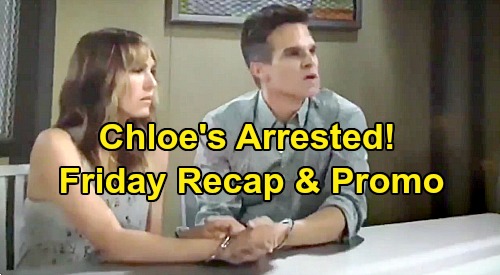 The Young and the Restless (Y&R) spoilers recap for Friday, August 23, tease that Chelsea Newman (Melissa Claire Egan) and Adam Newman (Mark Grossman) will leave after spotting “Shick” at the Dive Bar. After they’re gone, Sharon Newman (Sharon Case) will pull back from Nick Newman’s (Joshua Morrow) embrace and assure him it wasn’t a move. She’ll think Nick’s in a relationship with Chelsea, but he’ll insist that’s not the case.

Nick and Sharon will talk about their friendship before shifting back to Adam. He’ll just want Sharon to see Adam for who he really is and keep his distance. Meanwhile, Chelsea and Adam will take their meeting back to his penthouse. He’ll push her buttons about Nick and learn they aren’t together. Adam will note that it means they aren’t sleeping together, so he’ll suggest he hopes Chelsea’s running a con.

Chelsea will counter that they’re just going at a slow pace, but she’ll point out Sharon’s side of this must’ve been tough to watch. She’ll think Adam must’ve pushed Sharon too hard. The Young and the Restless spoilers say they’ll argue until Chelsea lashes out. She’ll insist that Adam makes everything about him and can’t manipulate people into loving him.

At Society, Celeste Rosales (Eva LaRue) will enjoy chatting with her boys. Arturo Rosales (Jason Canela) and Rey Rosales (Jordi Vilasuso) will manage to patch things up for the most part. They’ll be on good terms as Arturo leaves for the airport. Later, Adam will lurk as Nick and Victor Newman (Eric Braeden) have a visit with Christian Newman (Alex Wilson). Victor will catch a glimpse of Adam and silently shoo him away.

Over with Mariah Copeland (Camryn Grimes) and Tessa Porter (Cait Fairbanks), they’ll be stressed over work. Mariah will rant about Theo Vanderway (Tyler Johnson) and fret about calls that aren’t being returned. Tessa will feel like she’s starting from scratch since a new producer has taken over for Ana Hamilton (Loren Lott). Mariah will decide they need to relax, so they’ll head over to the GCAC roof deck.

Back with Chelsea, she’ll spot Sharon at Crimson Lights and mention her embrace with Nick. Sharon won’t see why a hug between friends would bother Chelsea. Y&R spoilers say Chelsea will insist she’s not with Nick and remind Sharon that her husband just died. Sharon won’t exactly think Chelsea’s playing the part of a grieving widow.

Chelsea will fire back about Sharon’s romantic track record. They’ll bicker as Sharon insists she hasn’t forgiven and forgotten everything like Nick. Sharon will be curious what Chelsea’s up to right now. Chelsea will argue that Sharon is always a source of drama, but they’ll eventually settle down a bit. They’ll acknowledge that they’re in a twisted sisterhood due to their connection to the Newman brothers.

Chelsea will confess that Adam saw Nick and Sharon’s hug, too. She’ll note that Adam was upset about it and suggest that Sharon’s feelings run deeper than she’s letting on. Over with new DA Michael Baldwin (Christian LeBlanc), he’ll get some congratulatory words from Lauren Baldwin (Tracey E. Bregman). Victor will also appear and warn Michael about the threat Adam made against his family.

Victor will suggest that Michael had better not be on the wrong side when it’s all over. Once Victor departs, Lauren will have concerns about Michael’s new position. He’s already facing threats! Michael will brush off the incident and push Lauren to be patient when she brings up Kevin Fisher (Greg Rikaart).

Later, Michael will fill Rey in on arrest warrant. He’ll need the detective to handle this personally and discreetly, so Rey will promise he’s on it. Once Rey tracks down the suspect and takes her into custody, he’ll let Michael know she’s in the interrogation room. It’ll be Chloe Mitchell (Elizabeth Hendrickson)!

Kevin will suddenly pop up to punch Michael for betraying him, so it sounds like some exciting scenes are on the way. The Young and the Restless fans won’t want to miss what’s in store. We’ll give you updates as other Y&R news comes in. Stay tuned to the CBS soap and don’t forget to check CDL often for the latest Young and the Restless spoilers, updates and news.