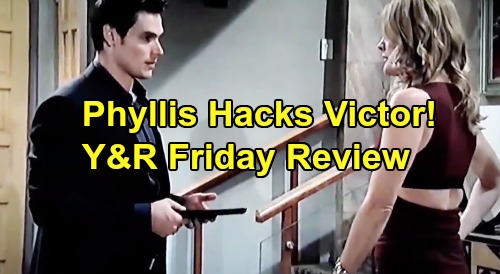 The Young and the Restless spoilers review for Friday, August 30, tease that on the morning after Billy Abbott’s (Jason Thompson) attempt on Adam Newman’s (Mark Grossman) life, Kevin Fisher (Greg Rikaart) and Chloe Mitchell (Elizabeth Hendrickson) will stand over an unconscious Billy in a cabin. Kevin will remark that they can’t take Billy to a hospital given his crime. Chloe will have put a makeshift splint on Billy’s injured leg, so it looks like he’ll be there for a while.

Kevin will get a text from Michael Baldwin (Christian LeBlanc) indicating that the judge signed off on everything and Chloe’s free, but they’ll still be worried that Adam will suspect Chloe of Billy’s crime. They’ll decide it’s best to act like they’ve got nothing to hide. And when Billy wakes up agitated, Kevin will inject him with a tranquilizer and the two will leave the cabin.

Later, Kevin and Chloe will be at Crimson Lights when Chelsea Lawson (Melissa Claire Egan) spots Chloe. She’ll be completely stunned to see Chloe alive. Her first instinct will be to call the police since Chloe tried to kill Adam, but Chloe will explain that she was already arrested for that. Chelsea will surmise that Michael got her off on the charges. Furious, Chelsea will rail against Chloe, saying that Chloe put her through hell.

Ultimately, she’ll tell Chloe every single thing that she’s responsible for, which includes Adam’s current demeanor and actions. Chloe will try to explain how she wasn’t thinking about the consequences of her actions in the past, and that Delia Abbott’s (Sophie Pollono) death pushed her over an emotional edge, but Chelsea won’t be having it. Chelsea will say that repairing their friendship isn’t possible, leaving Chloe shaken.

Meanwhile, on the new episode of Y&R on Friday, August 30, Adam will be at his penthouse, shaken from the night before. Phyllis Summers (Michelle Stafford) will arrive and hear the story about how someone tried to run him over on Route 7. As it turns out, Adam didn’t see who was driving the car or pushed him aside, and he got knocked out. Adam will say that he’s ruled out Billy or Kevin as the driver, and Phyllis will suggest that Victor Newman (Eric Braeden) was behind it.

Later, Adam will burst into the Newman ranch to confront Victor. He’ll rail against Victor for his actions, but Victor won’t know what Adam’s talking about. That will rile Adam, and a vicious shouting match will ensue, as the men rehash what’s been going on, including Christian Newman’s (Alex Wilson) custody suit. Finally, Adam will yell at Victor about luring him with his mother’s handkerchief and trying to run him down.

Victor will adamantly deny using his mother’s memory in that way, and he’ll say that his mother would be ashamed of him now. Adam will say that he despises Victor and leave in a huff before Victor calls one of his associates to find out everything possible about what happened out there on Route 7.

Adam will then make his way to the bar at Society, where he’ll again encounter Phyllis. Phyllis will gripe and complain about her awful day and about how Adam sold The Grand Phoenix to Abby Newman (Melissa Ordway). Exasperated, Adam will remind her that someone tried to kill him last night, and he’ll do his own share of griping and complaining about his earlier argument with Victor.

Phyllis will think that it’s definitely payback time. Adam will want any payback against Victor to be deep, personal, and long-lasting, and he’ll remark about the irony of Victor cheating death. Phyllis will wonder what he means, and he’ll tell her about Victor’s rare blood disease and about how the experimental treatments seem to be working. Phyllis will coldly wonder if he could just let the disease take Victor. And with that, Adam will say that perhaps there’s a way to prove to Victor that he’s not invincible.

So, will Adam decide to somehow tamper with the medical treatment that Victor is getting? It’s a terrible thought, but it certainly sounds like that’s where Adam’s mind is going. Ongoing Y&R spoilers indicate that Adam will want Phyllis to hack into Nate Hastings’ (Sean Dominick) files regarding Victor’s treatment, so it seems that Adam at least wants to find out just how dire Victor’s health situation might be. Could he be planning to switch out Victor’s medication with placebos?