The Young and the Restless Spoilers: Friday, August 9 – Adam Fumes Over Victoria’s Bold Move – Nate Stunned by Abby’s Nasty Side

BY Heather Hughes on August 8, 2019 | Comments: one comment
Related : Soap Opera, Spoiler, Television, The Young and the Restless 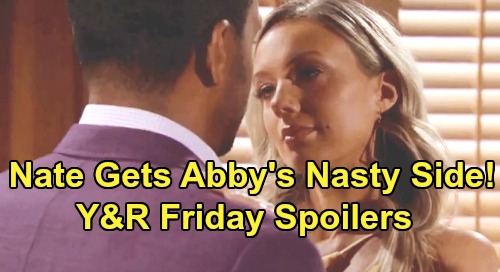 The Young and the Restless (Y&R) spoilers for Friday, August 9, tease that Adam Newman (Mark Grossman) will face a setback. Victoria Newman (Amelia Heinle) will back Adam into a corner, so he’ll have to find a way out or surrender for now. Since Victoria is Christian Newman’s temporary guardian, perhaps this will have something to do with the custody drama.

Victoria tried her best to keep Adam away from Christian, but the court ruled she was in violation of the agreement. Will Victoria try some other maneuver to keep Adam away again? Adam cares more about Christian than Dark Horse, but he still has a business to run. Victoria might have some trick in her back pocket, especially since Phyllis Summers (Michelle Stafford) alluded to her continued agenda.

The Grand Phoenix is awfully important right now, and Adam managed to outwit Phyllis by keeping it. If Victoria’s strategy could make the hotel crash and burn, Adam might be stymied for the time being. He might hold off on his next Christian visit if that’s what Victoria demands. Then again, Adam might be forced to sell the place at a lower price than he wanted.

Whatever the case, you can bet Adam won’t be happy about Victoria’s bold move. Meanwhile, Y&R spoilers state that Jack Abbott (Peter Bergman) will take action. He’ll step up to handle a difficult situation, so what’s this all about?

Mariah Copeland (Camryn Grimes) breaks up Abby Newman (Melissa Ordway) and Summer Newman’s (Hunter King) brawl on Thursday, but that doesn’t mean they’ll give it a rest. They might end up right back at it on Friday, which could force Jack to intervene. He has a bond with both Summer and Abby, so he’d be the perfect person to settle them down.

However, Abby can’t undo her outburst and that could spell trouble for her romance. She’s already on thin ice since she’s been sending mixed signals to Nate Hastings (Sean Dominic). The Young and the Restless spoilers say Nate’s eyes will be opened. He’ll see Abby’s nasty side thanks to her party blowup, which could turn him off a bit.

This doesn’t necessarily mean Abby and Nate are over, but it could lead Nate to pull back. He may need time to mull over who Abby really is and figure out if that’s who he wants. The Young and the Restless spoilers say some great scenes are coming up. We’ll give you updates as other Y&R news emerges. Stay tuned to the CBS soap and don’t forget to check CDL often for the latest Young and the Restless spoilers, updates and news.

Don’t miss every heart-pounding moment on #YR this week! 💥 pic.twitter.com/JOywXKwWcD