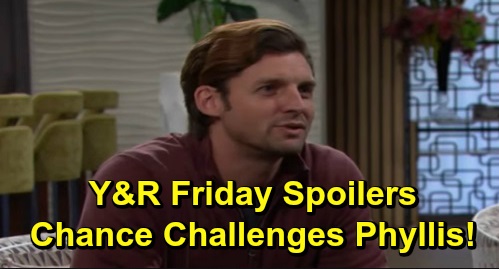 The Young and the Restless (Y&R) spoilers for Friday, December 13, tease that Phyllis Summers (Michelle Stafford) will push “Chance” Chancellor’s (Donny Boaz) buttons once again. Y&R fans know Abby Newman (Melissa Ordway) fired Phyllis and promptly offered the head of security job to Chance instead. Phyllis naturally won’t be too happy about that. She’s bound to insult Chance about sleeping his way to the top.

Of course, Chance and Abby haven’t hooked up yet, but that won’t make any difference to Phyllis. She’ll surely suggest this brewing romance is the real reason Chance landed the position. To be fair, Phyllis is probably right! It’s doubtful Abby would’ve offered Chance this opportunity if she wasn’t crushing on him so hard.

Phyllis may eventually bring up Vegas again and wonder how Abby would feel about Chance if the details got out. The Young and the Restless spoilers say Chance will refuse to cower in fear. He’ll challenge Phyllis to spill what she knows, but he won’t think she really knows anything at all.

Will Phyllis divulge some info that rattles Chance or is she bluffing as he suspects? Either way, Chance had better be careful. A vengeful Phyllis is a dangerous Phyllis – just ask pretty much anyone in Genoa City! In the meantime, Billy Abbott (Jason Thompson) will head back to the dive bar to relax and enjoy some good company. He’ll be pleased when he once again spots Amanda Sinclair (Mishael Morgan) there.

This is quickly becoming Amanda and Billy’s secret hiding place. It’s their little hotspot where they can unwind and recharge. Unfortunately, Billy’s begging for trouble by sneaking around and lying to Victoria Newman (Amelia Heinle). He’s digging a hole for himself that may become too big to climb out of.

For now, Billy will continue to open up to Amanda. Perhaps Amanda will provide a few more hints about her own difficulties as well. Based on her comments and the whole tracker situation, it’s safe to say Amanda’s on the run from a dangerous ex. There’s clearly someone in Amanda’s past who was abusive and threatening, so she’d rather not see his face in GC.

Sadly, that’s destined to happen since this is a soap opera. Amanda will inevitably come face to face with the danger she’s been trying to avoid. Until then, let’s talk about Chelsea Newman (Melissa Claire Egan). She’ll think it’s time to set some firm boundaries with Adam Newman (Mark Grossman) and perhaps make Connor Newman (Judah Mackey) understand that they’re not getting back together.

Since The Young and the Restless is obviously prepping for Chelsea and Adam’s reunion, Chelsea’s just fighting the inevitable! It won’t be long until her relationship with Nick Newman (Joshua Morrow) falls apart and paves the way “Chadam” again. We’ll give you updates as other Y&R news comes in. Stay tuned to the CBS soap and don’t forget to check CDL often for the latest Young and the Restless spoilers, updates and news.