The Young and the Restless Spoilers: Thursday, December 12 Recap – Amanda Hired Company to Erase Her Past – Kyle’s Co-CEO Demand Pays Off 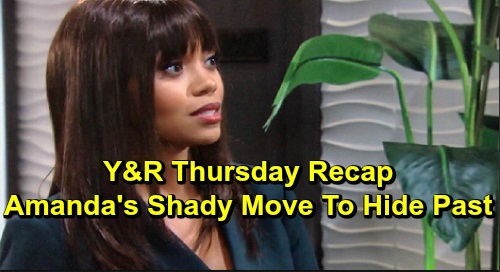 The Young and the Restless (Y&R) spoilers recap for Thursday, December 11, teases that Theo Vanderway (Tyler Johnson) will face questions from Summer Newman (Hunter King). He’ll be looking for the notes Jack Abbott (Peter Bergman) left him when Summer appears. She’ll wonder what Theo’s up to before he finds the notes and mentions Kyle Abbott’s (Michael Mealor) meeting with Jack.

When Summer stays tight-lipped on what the meeting’s about, Theo will suggest she’s keeping secrets. Summer will eventually bring up the bad blood between Theo and Kyle. She won’t want Theo to blow up the opportunity he’s landed, but Theo will make it clear that he has no intention of doing that.

At Devon Hamilton’s (Bryton James) place, he’ll vent to Mariah Copeland (Camryn Grimes) about Elena Dawson (Brytni Sarpy) pushing for peace with Amanda Sinclair (Mishael Morgan). Devon will grumble about Nate Hastings (Sean Dominic) being responsible and wishing he’d mind his own business. He’ll also talk about wanting space to figure things out on his own, but Mariah will think he should be careful when it comes to Elena.

Afterward at Society, Mariah will fill Lola Rosales (Sasha Calle) in on Summer and Theo’s split. She’ll advise Lola to watch out for Summer since Kyle tends to be naïve when it comes to her. At a table, Kyle will surprise Jack by suggesting they should be co-CEOs. Jack will offer to draw up documents that prove Kyle will be his successor someday, but Kyle will want to share the position now.

In fact, Kyle will hint that he may have to explore options elsewhere if Jack won’t cave in. The Young and the Restless spoilers say Jack will decide to give this arrangement a try, so they’ll shake on sharing the co-CEO spot. Soon after, Lola will get the scoop followed by Mariah and Theo. Kyle and Lola’s celebratory kiss will catch Theo’s attention. When Theo suggests buying a round of drinks, no one will have the time.

However, Lola will manage to squeeze in a few moments with Theo later. She’ll wonder if his breakup had anything to do with Summer and Kyle, but he’ll deny it. Theo will also get Lola talking about the restaurant she’d like to own one day. She’ll also love the idea of having the whole package – complete with a house, a dog and some kids. Theo will assure Lola that she’s going to be a great mom.

At the coffeehouse, Nate will be pleased by Elena’s updates regarding Amanda. He’ll be glad they made peace, but Elena will remain troubled about Devon. She’ll think Devon’s problems are really about not being able to get over Hilary Hamilton (Mishael Morgan). Nate will acknowledge the tricky situation Devon’s in, but he’ll add that Devon loves Elena. She’ll do her best to be optimistic about what’s ahead.

At home, Victor Newman (Eric Braeden) will receive intriguing news about Amanda. He’ll take a moment to ponder it before he heads to Jabot. Victor will congratulate Summer on her promotion before she reveals that she’s just friends with Theo now. He’ll confess to running an investigation on Theo at one point and battling some worries.

Victor will think the right guy is still out there for Summer and may even be somebody she already knows. Summer will reiterate that she’ll try to forgive Victor for faking his death. She’ll give her grandpa a hug and leave him with a big grin.

Next, Summer will be ecstatic to hear about Kyle’s co-CEO job and will join him for Champagne. Kyle will suggest that Summer’s been an inspiration to him since she was willing to walk away from opportunities Victor gave her. Their conversation will shift to Theo, so Summer will mention he was rummaging through papers earlier and reveal that they broke up. After learning that, Kyle will feel like another toast is in order.

Once Kyle makes it back home, Lola will be waiting in a robe with Champagne. Kyle will confess that he already had some bubbly at the office with Summer. Y&R spoilers state that Lola will show off some lingerie, so Kyle will gush about what a great day this is – and Lola’s about to make it even better.

Back at Devon’s penthouse, he’ll be annoyed by Nate’s visit. Devon will think Nate’s just there to defend Amanda as usual, but Nate will express concern for Devon. He’ll bring up Hilary, so Devon will eventually admit his pain runs deeper than he’s let on. Since Devon won’t want to burden Elena with how he’s feeling, Nate will push Devon to confide in a therapist. Devon will think the best thing he can do is just stay away from Amanda.

After Nate leaves, Devon will get a visit from Victor. The Young and the Restless spoilers say Victor will pass along what he’s learned. It turns out Amanda hired a company to erase her history, and that’s why there’s no sign of her anywhere online. Victor will reveal that Amanda did this around the time Colin Atkinson (Tristan Rogers) kicked off his scam.

Once Victor hands over all the available info, he’ll assure Devon that they’ll catch Colin and Amanda if she’s indeed his accomplice. It sounds like an action-packed episode’s coming up. We’ll keep you posted as other Y&R details emerge. Stay tuned to the CBS soap and don’t forget to check CDL often for the latest Young and the Restless spoilers, updates and news.