The Young and the Restless Spoilers: ‘Villy’ Crashes and Burns, Billy Only Has Himself to Blame – Secrets and Scandals Cost Him Victoria?

BY Heather Hughes on December 10, 2019 | Comments: one comment
Related : Soap Opera, Spoiler, Television, The Young and the Restless 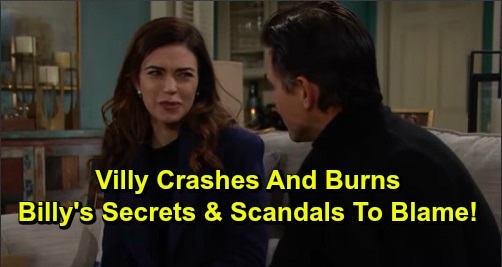 The Young and the Restless (Y&R) spoilers tease that Billy Abbott’s (Jason Thompson) identity crisis will continue. He’s struggling to figure out who he is and what he wants, which could lead him down a risky path. For starters, Billy’s formed a dangerous connection with Amanda Sinclair (Mishael Morgan).

Of course, it’s completely possible for men and women to be friends. Billy and Amanda’s growing bond isn’t a huge deal yet, but it could become one – especially since Billy’s keeping it a secret from Victoria Newman (Amelia Heinle). He wondered to himself why he was hiding things unnecessarily and giving himself this burden of guilt.

Nevertheless, Billy will keep sneaking around and doing things behind Victoria’s back. He’ll tell more lies and leave out important details, which isn’t fair to Victoria. Y&R fans know Victoria’s been working hard as Newman Enterprises’ CEO. She’s busy and that makes it hard to carve out couple time, but that’s a common problem in almost any relationship.

Billy’s the one who suddenly had an epiphany and decided to walk away from Jabot. All the anger and bitter battles he was facing there weren’t doing him any good, but he really should’ve had something lined up before he left. Now Billy’s just wandering around aimlessly. He wants to hang out a dive bar where he doesn’t have to be perfect all the time, but who’s asking Billy to be perfect?

Victoria certainly isn’t. She was right by Billy’s side at that boathouse when he fought off his dark side. It’s not Victoria’s fault that she has a job and Billy chose to leave his. She’s genuinely tried to help Billy find a new path, but he’s been insistent on figuring something out on his own. The trouble is…Billy isn’t figuring out much of anything at all.

The Young and the Restless is creating emotional distance between Billy and Victoria, but let’s hope they don’t make Victoria out to be the guilty party. She isn’t neglecting Billy; she’s just being an adult who has responsibilities she can’t ignore.

Billy, on the other hand, is ignoring his responsibility to be honest with Victoria about how he’s feeling. He’s also dashing off to a dive bar every chance he gets when Victoria could surely use a little more help at home. Billy needs to grow up and get a grip on his life, but will he be able to do that without taking things too far?

If Billy ends up cheating with Amanda and destroying his relationship with Victoria, he only has himself to blame. The Young and the Restless spoilers say Amanda and Billy’s connection could indeed take a destructive turn, so stay tuned to see what’s in store. We’ll give you updates as other Y&R news comes in. Stick with the CBS soap and don’t forget to check CDL often for the latest Young and the Restless spoilers, updates and news.