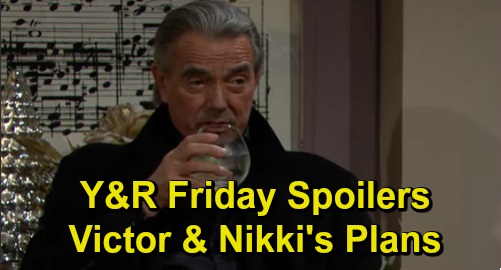 The Young and the Restless (Y&R) spoilers for Friday, December 20, tease that Jack Abbott (Peter Bergman) will focus on his family. That’s something Jack’s been doing a lot of lately – especially since he found out Theo Vanderway (Tyler Johnson) is Dina Mergeron’s (Marla Adams) grandson. Jack has done his best to welcome Theo into the Abbott clan with open arms, which Kyle Abbott (Michael Mealor) obviously isn’t too thrilled about.

Despite a hiccup with Theo at Jabot, Jack will put that snag aside and continue getting to know him outside of work. Theo will stop by the Abbott mansion for some drinks and good company. He’ll enjoy bonding with Jack as well as Traci Abbott (Beth Maitland), who’s got pretty much the warmest heart on the planet. Traci should help Jack make Theo feel right at home.

Of course, there are still questions and concerns about who Theo is at his core. Kyle always claims he’s going to give Theo a chance, but doubts and resentment tend to rile him up. To be fair, Theo basically just decided he’d changed and expected everyone to accept it immediately. That’s not how soap redemption works. It’s a slow process that involves a character humbling his or herself and showing a pattern of positive changes. Theo targeted Kyle for months, so Kyle can’t forgive and forget overnight.

However, Kyle could stand to grow up a little and just let things play out. There’s no need to stir the pot or provoke Theo, but that’s probably what Kyle will keep doing. In the meantime, Victor Newman (Eric Braeden) and Nikki Newman (Melody Thomas Scott) will hold a family meeting. It might be a small gathering to discuss Christmas plans.

Nikki and Victor will be celebrating the holiday early thanks to Victoria Newman (Amelia Heinle), Billy Abbott (Jason Thompson) and the kids. The “Villy” family is headed to Telluride for Christmas, so Grandma and Grandpa will make the magic happen a bit sooner. The Young and the Restless spoilers say some sweet moments are coming up within the next few Y&R episodes.

Over with Phyllis Summers (Michelle Stafford), she’ll catch Summer Newman (Hunter King) off guard. There’s no word on how Phyllis will surprise her daughter, but Summer will indeed be surprised. This might have something to do with Phyllis’ feelings for Nick Newman (Joshua Morrow) or perhaps Adam Newman’s (Mark Grossman) plot to use her. Phyllis might spill more than she planned and leave Summer uneasy about what’s brewing.