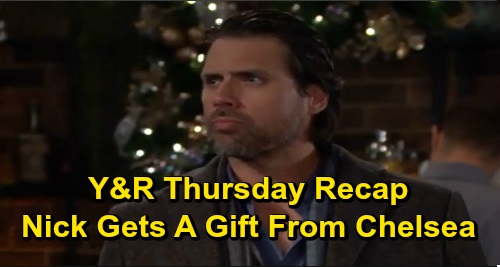 The Young and the Restless (Y&R) spoilers for Thursday, December 19, tease that Phyllis Summers (Michelle Stafford) will air her grievances. At Society, Phyllis will complain to Jack Abbott (Peter Bergman) about Abby Newman (Melissa Ordway) firing her. She’ll also gripe about Adam Newman (Mark Grossman) asking her to do something degrading.

Jack will brush off Phyllis’ grumbling and hint that she’s a woman scored. An angry Phyllis will shut down the idea that slept with Adam. Jack will just want Phyllis to settle down and nix any plans she might have to wage war. He’ll feel like Phyllis really has to stop getting in her own way.

At the Grand Phoenix, Chelsea Lawson (Melissa Claire Egan) will turn down Adam’s request to hang out while Connor’s busy with Sharon Newman (Sharon Case). Chelsea will insist she needs to do some shopping for Nick Newman (Joshua Morrow). Over with Abby, she’ll spot Jack as he’s leaving a voicemail for Billy Abbott (Jason Thompson). Abby will confess that Victoria Newman (Amelia Heinle) said they weren’t spending much time together.

Jack will assure Abby that he’s going to have a chat with Billy. He’ll start talking about the importance of family before he lets Abby know he’s proud of her. At Nick’s place, Summer Newman (Hunter King) will grill her dad about his relationship. She’ll wonder where Chelsea’s been and ask what the heck’s going on with them.

After Nick brings Summer up to speed, she’ll express doubt that this is just about Connor. The Young and the Restless spoilers say Summer will suspect Adam’s going after what he wants. Nick will feel like they can get over this hurdle, but Summer will put the blame on Chelsea. She’ll think Chelsea should be the one to make changes.

Chelsea will arrive in time to catch the end of their argument. Once Summer leaves, Chelsea will offer Nick reassurance about how much she cares. She’ll plead with him to just hang on a little longer. After making love, Nick will open a gift from Chelsea. He’ll see that it’s a framed picture of their dream home, so they’ll acknowledge that they haven’t given up on their future.

At Adam’s penthouse, Sharon will encourage Connor to open up about why he lied. He’ll apologize at his parents’ request and suggest he’s learned he’s better off telling the truth. Connor will discuss how he’s happy when his mom and dad are together, so Sharon will have some concerns.

Once Adam comes home, Sharon will speak with him privately about Connor’s session. She’ll contend that Connor may be drawing the wrong conclusions. Sharon will feel like honesty is the best policy, but Adam won’t feel the timing is right. Y&R spoilers say Sharon will counter that the subject should at least be brought up. They can try to gently correct Connor’s view of Chelsea and Adam’s relationship.

After Sharon’s gone, Adam will talk to Connor about his desire for a skateboard. He’ll promise to help Connor win Chelsea over. A little later, Adam will have a dream about Chelsea declaring her love and kissing him passionately. Chelsea will come home soon after with questions about Connor’s chat with Sharon. However, she’ll ultimately decide she’s wiped out and will just talk to Adam tomorrow.

At Society again, Summer will track down Phyllis and talk to her about remaining close with exes. They’ll also discuss the single life and how it’s best to wait until the right guy comes along. When Nick’s name comes up, Summer will confess that things have seemed weird between her dad and Chelsea lately.

At the coffeehouse, Elena Dawson (Brytni Sarpy) will once again debate the Amanda Sinclair (Mishael Morgan) situation with Nate Hastings (Sean Dominic). Moments later, Devon will show up and take Elena aside. He’ll mention the file Elena saw and will explain that Victor Newman (Eric Braeden) gave it to him.

Elena will be eager to help Devon learn the real story behind Amanda and how she came into his life. They’ll fret about Nate’s interest in Amanda before Nate walks over to voice his disapproval. He won’t be happy about the dossier, but Devon will try to explain. He’ll point out that a company was hired to erase Amanda’s history online. Devon will also bring up those troubling restraining orders.

Nate will view Devon’s dirt-digging as a waste of time, but Devon will think it sounds like Nate’s mostly worried about Amanda. Back at home, Devon will remain concerned about Nate getting too close to the threat. He’ll hope Nate sees the light soon, but he’ll be happy Elena’s got his back.