The Young and the Restless Spoilers: Tuesday, December 17 Review – Phyllis Furious After Adam’s Proposition – Connor Kicked Out Of School

BY hellodrdavis on December 17, 2019 | Comments: one comment
Related : Soap Opera, Spoiler, Television, The Young and the Restless 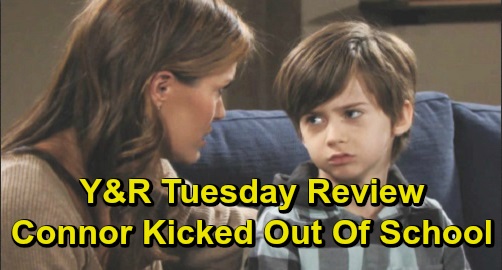 The Young and the Restless spoilers review for Tuesday, December 17, tease that Adam Newman (Mark Grossman) and Connor Newman (Judah Mackey) will arrive at the Newman Ranch. Connor will head to the stables while Nikki Newman (Melody Thomas Scott) and Adam chat. Adam will hint that something’s going on with Connor, and Nikki will finally get it out of him – the school administration has formally requested that Connor not return after winter break.

Nikki will think that this is outrageous, but Adam won’t want Victor Newman (Eric Braeden) or her to intervene. He will say that he and Chelsea are handling it, and that they’ve been handling things together as a family. Adam will then leave, while Connor stays.

Meanwhile, Chelsea Lawson (Melissa Claire Egan) will tell the tale about Connor’s school to Sharon Newman (Sharon Case) at Crimson Lights. Sharon will suggest that she talk with Amanda Sinclair (Mishael Morgan), who happens to be in the establishment. Amanda will listen to a worked-up Chelsea go through the details, and she’ll ultimately advise that it’s not a fight they likely want – rather, she’ll suggest that perhaps it’s time for a change as far as Connor’s schooling goes. That will give Chelsea food for thought.

Adam will head to Society, where he’ll see an interesting sight – Nick Newman (Joshua Morrow) and Phyllis Summers (Michelle Stafford) sitting at the bar, getting pretty chummy. They’ll be in the middle of a spirited and friendly conversation, and it will be clear to Adam that there’s still a spark between the two exes. Adam will step back outside and text Sharon to meet him at the penthouse right away.

Phyllis will arrive at Adam’s place, and Adam will say that he has a proposition for her – something that will guarantee that they both get what they want. He’ll say he needs Chelsea to be more focused on their family, but she’s currently torn and stressed out. So, he’ll want Phyllis to pursue Nick. This will immediately peeve Phyllis and she’ll start ranting and raving at Adam about treating her like one of his minions.

This will lead to a lot of back-and-forth between Adam and Phyllis, with Adam accusing Phyllis of secretly waning Nick, and Phyllis proclaiming that Adam doesn’t know her at all. Phyllis will blast Adam for treating people like pawns, and before she goes, she’ll tell him that he just made a big mistake that he’ll regret.

Back at the Newman ranch, Nikki will bring Nick up to speed on the situation with Connor and his school. But she’ll go on to say that Adam talked about Chelsea and Connor as if they were a cohesive family, and not in a co-parenting sort of situation. Nikki will say that she heard a man hoping to reset the clock and pick up where he left off with Chelsea. Nick noted that he loved Chelsea, but that things weren’t great right now.

Chelsea will then arrive at the ranch to pick up Connor and will find Nick and Nikki talking. Nikki will inform Chelsea that she brought Nick up to speed on Connor’s situation, and Nick will ask if he can see Connor. Chelsea will think that Connor would like that, and she and Nick will seem to warm up to each other for a brief moment.

Chelsea and Connor will then arrive back home to the penthouse, with Connor in good spirits from his visit. Chelsea will fill Adam in on her talk with Amanda, and will state that rather than freaking out, they need to keep their cool and get through this. Adam will agree and will vow again the they would do this…together.

Finally, Phyllis will manage to track Nick down at Society. She will watch from across the restaurant as Nick talks to the bartender about leaving his credit card there earlier. She will note to the hostess that she came to tell Nick about his brother, and that she could blow things up and get something she wants out of the deal, but that she won’t do it. She’ll say that she’ll take the high road for now.