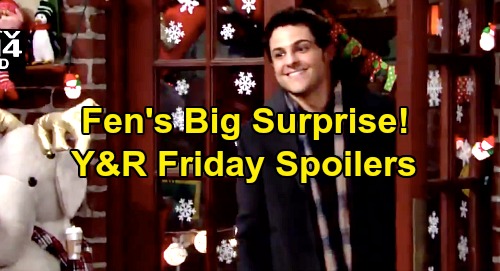 The Young and the Restless (Y&R) spoilers for Friday, December 27, tease that Genoa City will celebrate the holidays a little late. It’ll still be Christmas Eve in GC, so there’ll be plenty of time for festive surprises. At Crimson Lights, Lauren Baldwin (Tracey E. Bregman) will be pretty down in the dumps. She’ll hate that Fenmore “Fen” Baldwin (Zach Tinker) isn’t home to celebrate this year.

Michael Baldwin (Christian LeBlanc) will do his best to lift Lauren’s spirits, but they’re both in luck. That’s because Fen will come walking into the coffeehouse soon after. He’ll be fresh out of rehab and ready to start a new chapter of his life. Fen will feel all the love and support around him, which should warm his heart this holiday season.

Speaking of a heartwarming holiday, Jack Abbott (Peter Bergman) will want his family to have one, too. He’ll have a special gift for the Abbott clan, so it’ll be interesting to see what he has in mind. Regardless, the Abbotts and Baldwins will end their night with a joint celebration. There’ll be lots of raised glasses and Christmas cheer at Society, where this holiday party will take place.

Elsewhere, The Young and the Restless spoilers say a crisis will strike. It just wouldn’t be the holidays without a little Y&R drama. Fortunately, Mariah Copeland (Camryn Grimes) and Tessa Porter (Cait Fairbanks) will pull off a Christmas Eve rescue. The night before Christmas will be salvaged thanks to the team effort they cook up.

This will likely tie in with Sharon Newman (Sharon Case), Rey Rosales (Jordi Vilasuso) and Faith Newman (Alyvia Alyn Lind) somehow, but there’s no word on how exactly Mariah and Tessa will save the day. Whatever the case, this should be a fun way to get “Teriah” back in the mix. It’s always good when a Christmas Eve disaster can be averted!

As for Billy Abbott (Jason Thompson), he’ll still be in town while Victoria Newman (Amelia Heinle) and the kids are on their flight to Telluride. Will Billy seek out Amanda Sinclair (Mishael Morgan) so they don’t have to spend this Christmas Eve alone? The Young and the Restless spoilers say Billy and Amanda will keep testing boundaries as we head into the new year, so don’t miss all the action.

It sounds like some exciting things are ahead in Genoa City. We’ll give you updates as other Y&R news comes in. Stay tuned to the CBS soap and don’t forget to check CDL often for the latest Young and the Restless spoilers, updates and news.