BY Heather Hughes on February 7, 2019 | Comments: one comment
Related : Soap Opera, Spoiler, Television, The Young and the Restless 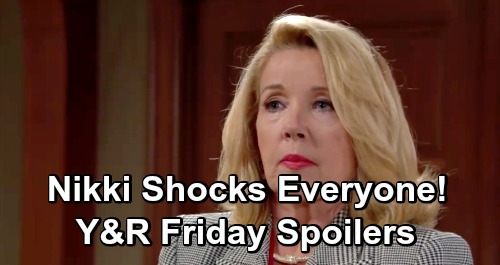 The Young and the Restless (Y&R) spoilers for Friday, February 8, tease that it’ll be a big day in Genoa City. When Victor Newman (Eric Braeden) is about to go on trial for murder, it’s a huge deal! Mariah Copeland (Camryn Grimes) promised Nick she’d back off covering the case. She assured Nick that she believed in Victor’s innocence, and now he knows why since the cover-up crew spilled all.

Of course, GC Buzz could still end up doing a report on this massive news event. It’s kind of tough to ignore! Regardless, there are other news outlets in town. You can bet this trial will turn into a media spectacle before it ever begins. Two special guest stars will be on hand in Friday’s episode. They’ll be part of the pre-trial chaos, so it’s clear that everyone will be talking about Victor’s fate.

Suzanne Marques covers lifestyle and entertainment for CBS Los Angeles. She’ll play an inquisitive reporter who’s looking for the hottest scoop. Nischelle Turner is an Entertainment Tonight correspondent and cohost as well as a CNN contributor. She’ll portray a news anchor who puts Victor front and center in the day’s top stories.

Despite the very public drama, Nick Newman (Eric Braeden) and Phyllis Summers (Gina Tognoni) will face a private battle. They both know Victor didn’t murder J.T. Hellstrom (Thad Luckinbill). In fact, there was no murder at all.

Nevertheless, it’s not like Phyllis and Nick can come clean. Phyllis certainly doesn’t want to implicate herself or even Nikki. They may not get along, but she doesn’t believe Nikki should land behind bars for protecting her daughter. Phyllis would’ve done the same thing if Summer Newman (Hunter King) had been the one in trouble. She’d sell Nikki out if she had to, but that’s not what she wants.

Nick also knows there a lot of people to shield here. He hates to see Victor go down for a crime he didn’t commit, but he can’t let Nikki, Phyllis, Victoria, or Sharon Newman (Sharon Case) face consequences. Nick will just have to keep his mouth shut and hope it all works out. Nikki, however, will decide she just can’t do that.

As Christine Williams (Lauralee Bell) and Rey Rosales (Jordi Vilasuso) arrive to take Victor to the courthouse, Nikki will put a stop to it. She’ll announce that there’s not going to be any trial. Nikki will insist that she has something to tell Rey and Christine, so they’ll be eager to hear it. It looks like Nikki will confess to killing J.T., which should kick off more drama for the Newman clan.

Other Young and the Restless spoilers say Abby Newman (Melissa Ordway) will have to backpedal a bit. Y&R fans know Abby gave Mia Rosales (Noemi Gonzalez) a fierce warning, so maybe she’ll fear she came on too strong.

Abby meant every word, but Mia has a way of twisting things and getting sympathy. It could force Abby to do some twisting of her own if Arturo Rosales (Jason Canela) isn’t pleased.