BY Heather Hughes on January 10, 2019 | Comments: one comment
Related : Soap Opera, Spoiler, Television, The Young and the Restless 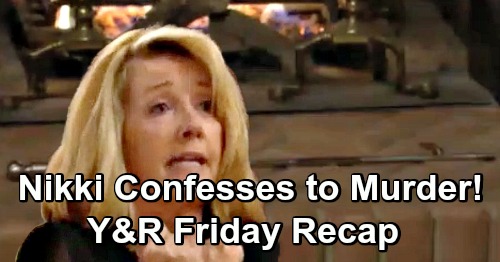 The Young and the Restless (Y&R) spoilers update and recap for Friday, January 11, tease that Victoria Newman (Amelia Heinle) and Nikki Newman (Melody Thomas Scott) will panic over what Phyllis Summers (Gina Tognoni) intends to reveal. She’ll insist on sharing the truth about J.T. Hellstrom (Thad Luckinbill) and Reed Hellstrom (Tristan Lake Leabu) will be eager to hear it. That’s when the abuse shocker will strike.

Phyllis will insist that J.T. abused Victoria both emotionally and physically. Reed won’t think that’s true, but Victoria will confirm that it is. She’ll hate that Reed had to find out like this. The Young and the Restless spoilers say the angry teen will trash Reed’s picture and rush out of the room.

Afterward, Victoria will address the crowd and Mackenzie “Mac” Browning (Kelly Kruger) will back her up. Everyone will be supportive as the ladies resolve to bury this bad part of their lives. Billy Abbott (Jason Thompson) will chew Phyllis out for sinking this low and question why Victoria told her. He’ll be surprised that Victoria would fill Phyllis in and not him.

Victoria will brush it off as a long story and thank Billy for being there for her. She’ll also get some kind words from Cane Ashby (Daniel Goddard) as well as Reed once he returns. Y&R spoilers say Victoria will hug her son, who’ll be sorry J.T. made her endure that.

At the ranch, Nick Newman (Joshua Morrow) will get Nikki settled in. After she notices the fireplace poker on the hearth, she’ll let out a scream. A confused Nick start to grab it until Nikki hisses at him not to. She’ll yell that it’s the murder weapon, which will leave Nick wondering how she knows that. That’s when Nikki will admit she killed J.T.

Other Young and the Restless spoilers say Rey Rosales (Jordi Vilasuso) and Sharon Newman (Sharon Case) will skid across some black ice. They’ll be on their way home after a GCPD assignment, but the car will refuse to start back up. Sharon and Rey will end up stuck at a motel that only has one room with one bed. They’ll check in and phone their loved ones to fill them in on the situation.

Meanwhile, Mia Rosales (Noemi Gonzalez) will share a close moment with Arturo Rosales (Jason Canela). As they keep warm under the comforter, Mia will reflect on the differences between Arturo and Rey. She’ll wish she could have two husbands, but Arturo will bring up Abby Newman (Melissa Ordway). He’ll be happy with the good thing they’ve got going.

Rey’s call will interrupt, but he won’t mention that he’s at the motel with Sharon. They’ll have an awkward evening as Sharon undresses while Rey averts his eyes. They’ll chat until it’s time to doze off, but Rey will struggle to fall asleep in the uncomfortable chair. Sharon will suggest that he should just share the bed with her. They’ll tell each other to have sweet dreams as they face away from each other.

Back with Arturo, he’ll call the cottage looking for Sharon. Arturo will want to tell her about the repaired furnace at Rey’s place. Mariah Copeland (Camryn Grimes) will note that Sharon won’t be home until tomorrow. She’s got car trouble somewhere and can’t get back. Naturally, Arturo will tell Mia and they’ll put it all together. Mia will end up worrying about what’s going on between Rey and Sharon.

The Young and the Restless spoilers say Arturo will reassure Mia, but she won’t think Rey even wants her. She’ll feel like he just reunited with her out of obligation, but Arturo will praise all her great qualities. They’ll almost kiss until Arturo puts a stop to it. He’ll contend that neither one of them should be doing this.

It sounds like another hot episode’s coming up. We’ll give you updates as other Y&R news emerges. Stay tuned to the CBS soap and don’t forget to check CDL often for the latest Young and the Restless spoilers, updates and news.