BY hellodrdavis on July 18, 2019 | Comments: one comment
Related : Soap Opera, Spoiler, Television, The Young and the Restless 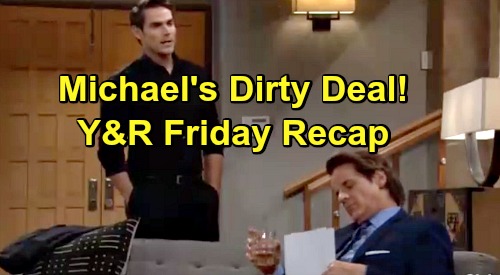 The Young and the Restless spoilers update and recap for Friday, July 19, tease that the Newman family dinner will definitely not go down as planned. Although the evening will start out well enough, with Victor Newman (Eric Braeden) going around the table and saying some nice words to each of his family members, it won’t be long before an unwanted guest shows up.

Adam Newman (Mark Grossman) and Phyllis Summers (Michelle Stafford) will crash the dinner, and Adam will want to know if Victor has any kind words for him. Victor will point out that Adam chose to distance himself from the family, and Nick Newman (Joshua Morrow) will insist that Adam leave.

Eventually, he’ll go, but Phyllis will remain and spar with Summer Newman (Hunter King), who will be horrified by her mom’s role in crashing the party and apparent close relationship with Adam.

After Adam leaves and the dinner resumes, Victor will experience some confusion. He’ll forget that it’s evening time, and he’ll announce to his family that he’s kept them long enough and that they have a full day’s work ahead of them. Eventually, Victor will come around, but his behavior will concern everyone.

Other Y&R spoilers indicate that Phyllis will let Adam know that Rey Rosales (Jordi Vilasuso) was asking her questions about Chance Chancellor (John Driscoll). Phyllis will inquire about what Adam and Chance did together in Las Vegas, but Adam won’t answer her question.

Next, on the new episode of Y&R on Friday, July 19, Lola Rosales (Sasha Calle) will get some details from Theo Vanderway (Tyler Johnson) about Kyle Abbott’s (Michael Mealor) time in New York City. He’ll reveal that there was a lot of partying and blondes. Later, Lola will tell Kyle that she needs to hear about his partying past directly from him, as she needs to know exactly who he is before she can marry him.

While Adam’s crashing the Newman family dinner, Kevin Fisher (Greg Rikaart) will enter Adam’s penthouse with the envelope he’s supposed to give to the judge in the custody case. He’ll be about to email the photos to someone, when Michael Baldwin (Christian LeBlanc) grabs the phone from Kevin and demands to know what he’s doing.

Kevin will reveal that Adam has compromising photos of the judge and that he’s supposed to use them to blackmail the judge into a favorable outcome for Adam in the custody case. But Kevin’s plan is to use the photos against Adam.

Michael, being the voice of reason, will point out that if Kevin crosses Adam, then Adam could tell the world that Chloe Mitchell (Elizabeth Hendrickson) is alive. Michael will tell Kevin that he’ll deal with the situation.

Later, Adam will return to the penthouse with Michael waiting for him. Adam will deduce that Michael is there about the photos, and Michael will offer to make a deal with Adam to save Kevin from himself.