BY Heather Hughes on June 13, 2019 | Comments: one comment
Related : Soap Opera, Spoiler, Television, The Young and the Restless 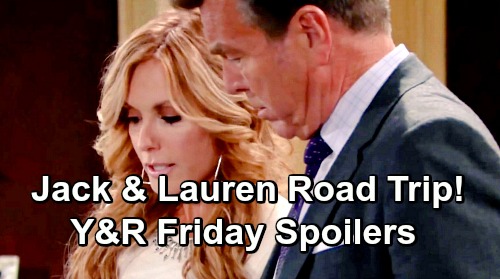 The Young and the Restless (Y&R) spoilers for Friday, June 14, tease that it’ll be time for a road trip. Jack Abbott (Peter Bergman) will join Lauren Baldwin (Tracey E. Bregman) for one, which should bring some bonding opportunities. Lauren and Jack will have a chance to open up to each other even more than usual.

If there are some mishaps along the way, that could prolong their trip and pull them even closer. When Rey Rosales (Jordi Vilasuso) and Sharon Newman (Sharon Case) hit the road, they ended up having to share a motel room. Could something similar happen to Lauren and Jack? There are no guarantees, but it’s wise to expect the unexpected when a road trip’s involved!

Y&R fans know Lauren tried to set Jack up, but that plan was a bust. Although she’s backed off for now, Lauren keeps insisting there’s a woman out there for Jack. The Young and the Restless has been exploring Jack and Lauren’s chemistry, but will they actually put them together? Lauren’s marriage is on solid ground at the moment, but that could change thanks to Kevin Fisher (Greg Rikaart).

The Young and the Restless spoilers say Michael will push Kevin for the truth on Friday’s new Y&R episode, June 14. He’s already been suspicious, but he won’t back down this time. Michael will demand to know why Kevin really came back to Genoa City. He’ll have a hunch that this could set up a total disaster.

Nick Newman (Joshua Morrow) may give Michael updates on Kevin’s meeting with Adam Newman (Mark Grossman). That would raise red flags for Michael and perhaps drive him to pry the details out of his brother. Since Adam was the last person to have contact with Phyllis Summers (Gina Tognoni), Michael may connect the dots and insist Kevin had to be involved in her disappearance somehow.

Will Kevin crack under the pressure? Will he spill the whole ugly story, including Chloe Mitchell’s (Elizabeth Hendrickson) survival and kidnapping? Will Kevin admit he abducted Phyllis in hopes of making a trade? The Young and the Restless spoilers point to Michael heading to the dark side along with Kevin. He may get the scoop and reluctantly pitch in on Kevin’s plot.

It’s tough to believe Michael will just let Phyllis remain a hostage though, so he may want to figure that part out ASAP. Phyllis causes trouble for Michael sometimes, but he does consider her a friend. Whatever the case, Michael will deal with some drama and the secrets he keeps could lead to issues with Lauren.