The Young and the Restless Spoilers: Friday, May 10 Recap – Mia Rushed to Hospital, Baby Crisis After Confession – Adam Stuns Sharon

BY Heather Hughes on May 9, 2019 | Comments: one comment
Related : Soap Opera, Spoiler, Television, The Young and the Restless 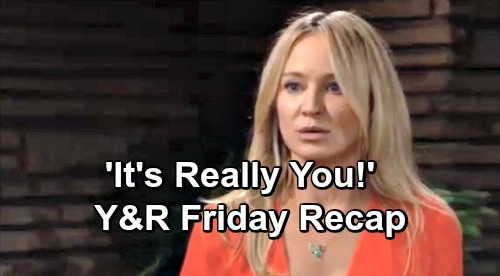 The Young and the Restless (Y&R) spoilers for Friday, May 10, tease that Rey Rosales (Jordi Vilasuso) will get a phone call from Lola Rosales (Sasha Calle). In Las Vegas, Rey will find out Lola knows about Mia Rosales (Noemi Gonzalez) being her attacker. She’ll rant about Arturo Rosales (Jason Canela) covering it up and ask Rey if he’ll come back to Genoa City.

Once Rey agrees and hangs up, he’ll battle guilt for lying to Lola. Rey will also have concerns about leaving Sharon to deal with Adam Newman (Mark Grossman) alone, but she’ll offer reassurance. Later, Sharon will speak with Victor Newman (Eric Braeden) again. They’ll discuss Victor’s complicated relationship with Adam and the pressure he’s putting on his son.

Sharon will get Victor to dial it down a bit and let her handle this. Soon after, Adam will text Sharon an address for their meeting. The Young and the Restless spoilers say Sharon will head over, but Riza Thompson (Tina Casciani) will answer the door. Riza will admit “Spider” is running late before she takes off.

That’ll leave Sharon to snoop through Adam’s trash, which will contain an envelope of family pics that Victor provided. Adam only kept one of Christian Newman (Jude and Ozzy McGuigen), so Sharon will ponder if after she finds it in a drawer. Y&R spoilers say Sharon will hear someone entering and look shocked when she turns. She’ll exclaim that it’s really him!

Back in Genoa City, Lola will spar with Arturo. However, she’ll assure him Mia’s secret is safe – but only because of the baby. Abby Newman (Melissa Ordway) will insist she’s staying silent for the same reason. Once Rey arrives, he’ll express gratitude for that and admit the truth to Lola. She’ll be upset over both her brothers’ deception, but she’ll promise she’s got her family’s back on this.

Abby will be outraged, but Arturo will hope to keep the cover-up intact. He’ll push Abby to confirm the story if the cops ask her about Mia’s alibi. In Mia’s hotel room, she’ll have a nightmare about Paul Williams’ (Doug Davidson) arresting her. Once she wakes up startled, Mia will pack her stuff and prepare to skip town.

However, Paul will arrive for real a bit later. He’ll get Mia flustered with his questions before noticing her luggage. Paul will insist that Mia’s story doesn’t add up and insist she should talk to him. As the pressure rises, Mia will blurt out that it was an accident. She’ll explain how the attack happened before baby pain leaves her doubled over.

At the coffeehouse, Summer Abbott (Hunter king) will fill Kyle Abbott (Michael Mealor) in on Theo Vanderway’s looming arrival. Theo’s bringing an influencer with him to GC, so they need to be prepared. Afterward, Summer will join Phyllis Summers (Gina Tognoni) and confront her about using her password. She’ll know her mom hacked Jabot’s servers, so she’ll voice her displeasure.

Phyllis will suggest that next time, maybe Summer could just leave her laptop open to Jabot’s designs. She’ll be eager to see what Jack’s offerings are, but Summer will shut down that idea. She won’t think Phyllis needs Jabot to be a success.

A little later, Phyllis will make a phone call to Ashley Abbott (Eileen Davidson). She’ll have a proposition for Ash to consider. Back with Summer and Kyle, they’ll join Theo and the influencer he brought to town, Nazanin Mandi Pimentel. Since Nazanin will want to see the Society scene, they’ll head over to grab a table.

Kyle will boast about his girlfriend is the chef there, so he’ll bring her out to meet the others. Abby will force Summer to snap a pic of Nazanin and Lola. Next, Arturo will meet up with Abby again. She’ll inform him that if the police check with her about Mia’s alibi, she isn’t going to lie to them.

Other Young and the Restless spoilers say Rey will get some shocking news. Paul will get in touch with the former detective about Mia’s sudden trip to the hospital. It won’t be long until Rey’s on his way with Arturo. We’ll give you updates as other Y&R details emerge. Stick with the CBS soap and don’t forget to check CDL often for the latest Young and the Restless spoilers, updates and news.

📺PREVIEW FOR NEXT WEEK 📺 #YR pic.twitter.com/1CI2cyELSb