BY Heather Hughes on May 23, 2019 | Comments: Leave Comments
Related : Soap Opera, Spoiler, Television, The Young and the Restless 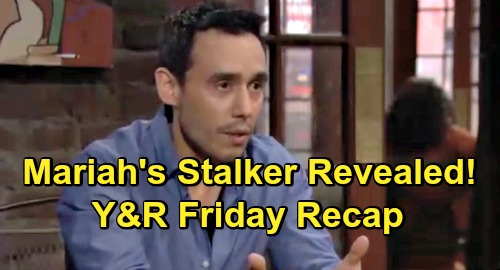 The Young and the Restless (Y&R) spoilers and recap for Friday, May 24, tease that Adam Newman (Mark Grossman) will destroy his old phone. After smashing it at the tack house, Adam will grab a new one before heading for the door. That’s when Sharon Newman (Sharon Case) will appear, but she won’t get the response she expected.

Adam won’t like having people in his face all the time. He’ll think Sharon should save her concern for somebody else, but she’ll urge him to open up. Instead, Adam will thank Sharon for her help and push her away. He’ll feel like she should focus on Rey Rosales (Jordi Vilasuso) and what they’ve found together.

At Dark Horse, Adam will meet with Victoria Newman (Amelia Heinle) and Nick Newman (Joshua Morrow). He’ll contend that he doesn’t want to return to Newman Enterprises and work under their father. Adam will be ready to put Victor Newman (Eric Braeden) and Genoa City in the rearview mirror, but there’s a catch – three catches actually.

The Young and the Restless spoilers say Adam will deliver the terms of his deal. He’ll be willing to get out of the Newmans hair in exchange for three things. For starters, Adam will want half a billion dollars! He’ll also demand info on Chelsea Newman (Melissa Claire Egan) and Connor Newman’s (Gunner and Ryder Gadbois) location. Finally, Adam will want custody of his youngest son.

Naturally, Nick will be outraged – especially about that Christian Newman (Jude and Ozzy McGuigen) part. Nick has raised the kid so far, so Christian is his son as far as he’s concerned. Nevertheless, Adam will stand his ground and argue that he wants Christian far away from Victor. He’ll want to bring Christian into his family and give him a new life.

Adam will jot down the number he can be reached at before he exits. That’ll leave Victoria and Nick to debate the situation. Y&R spoilers say Nick will refuse to let Adam win. He’ll add that he doesn’t even want Chelsea to be part of this, which will surprise Victoria. She’ll realize Nick knows how to get in touch with Adam’s love, but he won’t want Chelsea to know Adam survived.

Victoria, on the other hand, will feel like Chelsea probably deserves a heads-up. Once he’s alone, Nick will call Adam and announce that he’s reached a decision. At the penthouse, Ana Hamilton (Loren Lott) will continue her power trip. She’s got some terrible ideas for Tessa Porter’s (Cait Fairbanks) music career reboot, and we’ll see the results of some of them.

Tessa won’t care much for Ana’s new version of the song she recorded. She certainly won’t like the wild outfit Ana forces her to wear either. At Crimson Lights, Mariah Copeland (Camryn Grimes) will encounter a creepy man named Jared. He’ll bring up the fan mail he’s written, which has been ignored.

Mariah will assume Jared was the brick-thrower, so he’ll admit it. Jared will talk about how he had to get Mariah’s attention. He’ll eventually chew Mariah out for being self-centered and not caring about the connection he feels. That’s when Tessa will interrupt and rip into Jared. She’ll take his picture and threaten to send it to the GCPD if he doesn’t leave immediately.

It’s probably not the best idea to just let this guy go, but that’s what they’ll do for now. Mariah will thank Tessa for coming to her rescue before talk turns to Ana. Tessa will mention all the changes Ana’s made and express disapproval over them.

Y&R fans know Mariah recently shot down Ana’s plans. She was absolutely right about Ana not getting Tessa’s vibe, but this is Tessa’s battle to fight. After Mariah encourages Tessa to be honest, they’ll head over to the penthouse together. Tessa will admit she’s not pleased, but Ana will suggest it’s her way or the highway.

The Young and the Restless spoilers say Tessa will stand up for herself. She’ll suggest that Ana should just burn the contract. Ana will feel like Mariah set Tessa up to fail, but Mariah will counter that Tessa shouldn’t settle for less than she’s worth.

Over with Lola Rosales (Sasha Calle) and Kyle Abbott (Michael Mealor), they’ll learn they can have Rey’s apartment. The happy couple will be distracted by a make-out session when dinner starts to burn. Once they deal with the smoke, Kyle and Lola will head to the bedroom to make love.

At the cottage, Rey will get a warm welcome to his new home. He’ll offer Faith Newman (Alyvia Alyn Lind) a book as a gift and learn her ground rules. Afterward, Sharon will give Rey a kiss as they look forward to this new chapter.