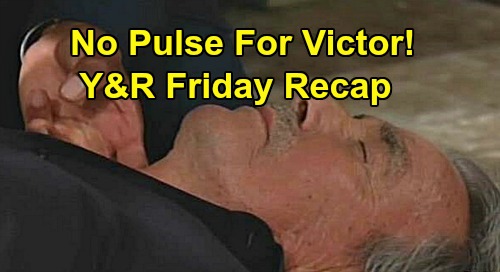 The Young and the Restless (Y&R) spoilers recap for Friday, September 13, tease that Billy Abbott (Jason Thompson) will struggle at the boathouse. He’ll have another Delia Abbott (Sophie Pollono) nightmare before he awakens to rant at his kidnapper. Chloe Mitchell (Elizabeth Hendrickson) will insist she’s trying to help. She won’t want Billy targeting Adam Newman (Mark Grossman) again, so he has to stay put.

Billy will urge Chloe to get in touch with Victoria Newman (Amelia Heinle) and bring her there. He’ll feel like Victoria can help him, so this secret’s about to get out. In the meantime, Victor Newman (Eric Braeden) and Nikki Newman (Melody Thomas Scott) will tackle a problem together. They’ll stand united as they prepare for a difficult family meeting.

At Society, Abby Newman (Melissa Ordway) will gripe about Zoe Hardisty’s (Anna Grace Barlow) scheme and having to cut Phyllis Summers (Michelle Stafford) back in the hotel deal. Devon Hamilton (Bryton James) will note that Phyllis wants the Grand Phoenix to do well just like Abby does. He’ll want to throw Elena Dawson (Brytni Sarpy) a birthday party there, so Abby will be grateful for the business.

Abby will get a text summoning her to the ranch, so she’ll take off. That’ll leave Devon to chat with Mariah Copeland (Camryn Grimes). Devon will wonder if Theo Vanderway (Tyler Johnson) was part of Zoe’s plan, but Mariah won’t think so. She’ll admit Theo’s ambitious, but she’ll point out she still doesn’t trust him.

Devon will point out that Mariah could always let Theo go, but she’ll decide to stick with the challenge. Mariah will also promise to be the perfect party planner for Elena. She’ll think it’ll be a night to remember in a good way. At the coffeehouse, Theo will pass along some career advice to Tessa Porter (Cait Fairbanks). She’ll suggest Mariah’s got it covered, but Theo will think another perspective would be useful.

After Theo insists he wasn’t in on Zoe’s plot, he’ll start talking about marketing streams and all the tours Tessa should be headlining. Theo will insist Tessa’s talented and beautiful, so she’ll quickly realize he’s hitting on her. Tessa will make it clear that she’s gay and in a committed relationship with Mariah, so she’s not interested in Theo. He won’t believe in labels, but Tessa will steer their chat back to work.

Once Tessa eventually ends their discussion and meets up with Mariah, she’ll fill her girlfriend in on Theo’s moves. Mariah will chuckle over Theo’s massive ego, but Tessa won’t think it’s funny. She’ll feel like Mariah needs to fire Theo, but Mariah will counter that she can handle him.

Over with Victoria, her phone will die and leave Chloe unable to reach her. Billy will decide it’s for the best since Victoria might not understand like Chloe. After Chloe heads out to get some supplies, The Young and the Restless spoilers say she’ll bump into Victoria at the park.

Chloe will come clean about having Billy stashed away and take Victoria back to the boathouse with her. She’ll warn that Billy can’t make a connection between himself and some of the things he’s doing. Chloe will add that she’s not sure which side of Billy will emerge when he wakes up. Y&R spoilers say Victoria will sit down next to Billy and offer words of reassurance.

At the ranch, Abby and Nick Newman (Joshua Morrow) will be curious about the reason for this meeting. Summer Newman (Hunter King) will also be on hand. Victor and Nikki won’t want to divulge much until Victoria arrives, but she won’t be returning any calls. Once Adam Newman (Mark Grossman) walks in, things will get a bit heated and prompt a warning from Nate Hastings (Sean Dominic). They have to be careful about Victor’s stress levels.

Since Victoria still won’t be around, they’ll decide they have to move forward without her. Victor will confess that his condition is getting worse, so he’ll have to receive treatment in a private facility. He’ll plan to leave tonight, so the family will express concern. Adam will ask if there’s anything he can do, which will rile Nick up.

Victor will admit there’s something all of them can do for him. He’ll want the family to come together and put their differences aside. After Victor gets reassurance, he’ll attempt to rise to his feet and falter. The Young and the Restless spoilers say Victor will collapse and lose consciousness, so the Newmans will be in panic mode. Nate won’t be able to find a pulse as Abby frantically calls for paramedics.

It sounds like another action-packed episode’s coming up. We’ll give you updates as other Y&R news emerges. Stay tuned to the CBS soap and don’t forget to check CDL often for the latest Young and the Restless spoilers, updates and news.