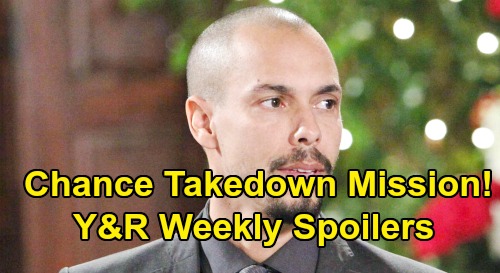 The Young and the Restless (Y&R) spoilers for the week of September 16-20 tease that some surprises are in store. First, let’s talk about Jack Abbott’s (Peter Bergman) road trip. He’s not sure what he’s looking for or where he’ll ultimately end up, but he knows Genoa City doesn’t have the answers. Jack will continue searching for what he needs as he attempts to fill the void.

Meanwhile, Sharon Newman (Sharon Case) will head off on a road trip of her own. She’s also feeling a little lost these days. Sharon needs a fresh perspective, so some time away from GC could help. Will Sharon inadvertently cross paths with Jack? The Young and the Restless spoilers say Jack will connect with someone startling, so that seems like a good possibility.

Maybe Sharon and Jack can renew their friendship as their trips overlap. They may offer each other some guidance that’ll help them before they return home. Over with Devon Hamilton (Bryton James), he’ll need Jill Abbott’s (Jess Walton) help. They’ll have another meeting as they prepare for battle. Katherine Chancellor’s (Jeanne Cooper) will is being contested, but Devon isn’t giving up his fortune without a fight.

This is about more than just the money. It’s about honoring Katherine’s wishes and keeping her legacy alive. Devon believes he’s the just the person to do that. He’s involved in plenty of charity work and does his best to help those in need. If this money lands in greedy hands, that’d be a slap in the face to Katherine and what she was all about.

Chance Chancellor is still the prime will challenger suspect. Phyllis Summers (Michelle Stafford) overheard Devon discussing the matter, so how will she fit in all this? You can bet Phyllis will grow increasingly curious and stir up some trouble. Since Adam Newman (Mark Grossman) was connected to Chance in Vegas, Phyllis may think this has Adam written all over it.

Other Young and the Restless spoilers say the Newmans will be in crisis mode. Victor Newman’s (Eric Braeden) health will leave Nikki Newman (Joshua Morrow) and his children concerned, but they’ll all rally around Victor. He’ll need support as he processes disturbing news, which could lead to pill-swapping Adam getting caught.

Y&R fans can expect Nikki’s rage to bubble up next week. Her protective side will be on full display, so that’ll bring a fierce pursuit of justice. Nikki will be out for blood if she puts the puzzle together and learns Adam targeted Victor’s meds.