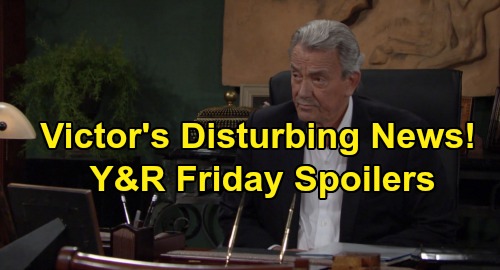 The Young and the Restless (Y&R) spoilers for Friday, September 13, tease that Victor Newman (Eric Braeden) will deliver a shocker. He’ll have some disturbing news to pass along, so this will undoubtedly involve Nate Hastings’ (Sean Dominic) test results. Will Nate’s findings reveal that Victor’s dosage is suddenly too high? This could be the first step toward Adam Newman’s (Mark Grossman) exposure.

Of course, Victor’s pill bottle looks perfectly normal. There might be some accusations hurled at whoever filled the prescription, but it shouldn’t be too long until suspicions land on Adam. It’s worth mentioning that Nikki Newman (Melody Thomas Scott) will be on a mission for justice next week. If she realizes Victor’s meds were tampered with, you can bet she’ll unleash her wrath on Adam.

Nikki won’t need proof to know who’s responsible, especially since she caught Adam by Victor’s jacket – which had the pills in the pocket. The jig may be up for Adam sooner rather than later. There’s always the possibility that Nate’s results will reveal something more serious instead, but Nikki’s justice pursuit still points to Adam trouble.

Other Y&R spoilers state that Devon Hamilton (Bryton James) will open up to Mariah Copeland (Camryn Grimes). That tells us Devon will either want to talk about Elena Dawson (Brytni Sarpy) or perhaps reveal something he’d rather not share with Elena. Devon might confide in Mariah about their “I love you” exchange and some conflicted emotions. No matter how much Devon loves Elena, saying those words to someone besides Hilary Hamilton (Mishael Morgan) has to be complicated.

Then again, there could be something else Devon wants to mention. He had a panic attack at the Grand Phoenix, which was brought on by the mix of Molly and his meds. However, Devon still could’ve had a vision of Hilary – or at least what he thought was a vision of Hilary. He stepped out to get some air at one point, so an offscreen moment could’ve played a role in Devon’s anxiety.

Devon is set to meet with a mysterious attorney named Amanda Sinclair soon. Her photo wasn’t available, which has led to whispers about a Hilary doppelganger. Since The Young and the Restless doesn’t want us to know what Amanda looks like yet, it could mean she’ll be played by someone familiar. There’s been talk of Mishael Morgan returning as a new character, so it fits here.

If Devon believes he had a Hilary hallucination, it might’ve actually been a glimpse of Amanda. That’d probably be something Devon would rather talk to Mariah about than Elena. He wouldn’t want Elena thinking he was stuck on Hilary when they just declared their love.

Over with Tessa Porter (Cait Fairbanks), she’ll have a tense conversation with Theo Vanderway (Tyler Johnson). Mariah doesn’t trust Theo, which is good since he’s plotting against her. She needs to stay on guard. Tessa is clearly just as suspicious of Theo, which should be evident during this little chat.

There’s no word on exactly what Theo and Tessa will discuss, but it may be related to Tessa’s music career. Some pretty wild pics are circulating thanks to the Grand Phoenix mayhem and Zoe Hardisty’s (Anna Grace Barlow) vengeful plan. Theo might have some advice on how to turn that whole scandal into buzz, but Tessa may be wary of taking it.

Finally, The Young and the Restless spoilers say Billy Abbott (Jason Thompson) will battle the darkness within him. His alter will still crave revenge on Adam, so that could present some challenges for Chloe Mitchell (Elizabeth Hendrickson). She’ll do her best to help Billy, but it could be harder than she thought.

It sounds like another great episode’s coming up. We’ll give you updates as other Y&R details emerge. Stay tuned to the CBS soap and don’t forget to check CDL often for the latest Young and the Restless spoilers, updates and news.