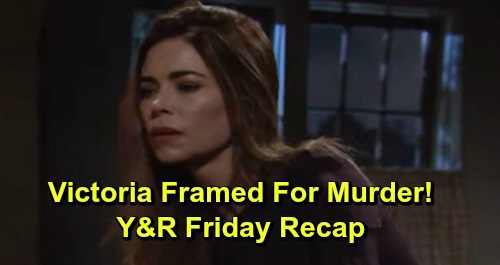 The Young and the Restless (Y&R) spoilers recap for Friday, September 20, teases that Devon Hamilton (Bryton James) will battle confusion over Hilary Hamilton’s (Mishael Morgan) doppelganger. She’ll introduce herself as Amanda Sinclair, a lawyer who’s representing Chance Chancellor. Amanda will point out that Chance was brought in the loop on an earlier draft of Katherine Chancellor’s (Jeanne Cooper) will – one that didn’t leave the bulk of her wealth to Devon.

Amanda will explain that this info came through David Sherman’s deathbed confession. She’ll argue that Tucker McCall (Stephen Nichols) paid for the will to be changed. As for Devon, he’ll pace as he struggles to comprehend Amanda’s appearance. Devon will point out that Amanda looks exactly like his late wife, so he won’t think it’s any coincidence that Chance found her specifically.

After Amanda offers her condolences, she’ll give Devon her card and mention that she’s staying at the Grand Phoenix. At Jabot, Jack Abbott (Peter Bergman) and Kyle Abbott (Michael Mealor) will discuss Victor Newman’s (Eric Braeden) death as well as Kyle’s time on throne. Kyle will confess that it was terrifying, but he enjoyed the challenge. Jack will be proud to keep Kyle around as his right-hand man.

Talk will turn to Summer Newman (Hunter King), who Kyle hasn’t seen since Victor died. Jack will encourage Kyle to step up and be a good friend to his ex. In the park, Theo Vanderway (Tyler Johnson) will support Summer as she deals with her loss. He’ll open up about losing his very powerful father to a heart attack at 15. Theo will wish he could speak to his dad again and tell him he was proud to be his son.

Soon after, Summer will get a text from Kyle. The Young and the Restless spoilers say Theo won’t be convinced Kyle’s truly over her. Back at Jabot, Summer will meet up with Kyle for a hug and support. Kyle will want Summer to know she can always turn to him if she needs to talk.

At Nick Newman’s (Joshua Morrow) place, he’ll get a visit from Sharon Newman (Sharon Case). She’ll be sympathetic at first, but their conversation will ultimately turn into an Adam Newman (Mark Grossman) debate. Nick will insist Adam’s responsible for Victor’s death, but Sharon will argue that Adam’s suffering, too. When Nick contends that he doesn’t want her caught in the crossfire, Sharon will make it clear that she’s moved on.

At the Grand Phoenix, Y&R spoilers say Adam will arrive to see Chelsea Newman (Melissa Claire Egan). He’ll demand to see Connor Newman (Judah Mackey), but Chelsea won’t think that’s the best plan. Adam will realize Nick’s suspicions are getting to her. He’ll rant about Chelsea not trusting him with his son.

Adam will also learn Connor hasn’t heard the news of Victor’s passing yet. He’ll continue to push for time with Connor and plead with Chelsea not to keep them apart. Chelsea will stand her ground and insist this is how it has to be right now.

At the coffeehouse, Rey Rosales (Jordi Vilasuso) and Paul Williams (Doug Davidson) will corner the woman who messed with Victor’s meds for Adam. They’ll warn about the evidence against her, so she’ll push for an immunity deal. After the woman scores it, she’ll admit to doubling the dosage and forging the labels. However, she’ll claim she was working for Victoria Newman (Amelia Heinle), not Adam.

That claim will send Paul and Rey to Victoria’s place. She’ll assure them she has nothing to hide and has no problems with a search. Victoria will contend that this woman is lying and hope the cops can take down the real culprit, Adam.

At Adam’s penthouse, Phyllis will pop in and discuss Adam’s pill swap scheme with him. She’ll mention that Adam planned to take over Newman Enterprises and wonder if the plan’s still in play. Back home with Nick, Chelsea will return to him and they’ll take a moment to unwind. Nick and Chelsea will decide to shut out world for a while, but chaos will be unleashed soon enough.

At the park again, Michael Baldwin (Christian LeBlanc) will speak with Adam over the phone. He’ll note that Paul called him as Adam said he would, so he agreed to the immunity deal. At Newman Enterprises, the office will be thoroughly searched. Thanks to Adam, Victoria’s desk will contain a bottle of Victor’s pills and Nate Hastings’ (Sean Dominic) stolen tablet.

Finally, Jack will spot Phyllis at the Grand Phoenix bar. She’ll admit she’s certainly not mourning for Victor. Phyllis will get emotional about recalling what Victor did to her and to them every time she saw him. Jack will be surprised since he thought Phyllis had worked through her pain. She’ll admit she bottled up her rage and suggest Victor will cast a shadow for quite a while.