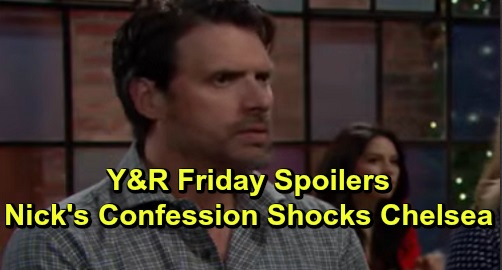 The Young and the Restless (Y&R) spoilers for Friday, September 27, tease that Chelsea Newman (Melissa Claire Egan) will comfort Connor Newman (Judah Mackey). The kid will be feeling down in the dumps thanks to Victor Newman’s (Eric Braeden) “death,” but Chelsea will do whatever she can to help. It hasn’t been that long since Connor lost his stepdad, Calvin Boudreau (John Burke), so it’s tough for him to face another loss so soon.

Of course, Chelsea will remain concerned about Adam Newman’s (Mark Grossman) involvement in all this. She can’t bear the idea of telling Connor his dad killed his grandpa. Chelsea will hope it doesn’t come to that, but she can’t be certain of anything anymore.

Y&R fans know Victor’s demise is actually an elaborate ruse to trap Adam, so that’s a crucial piece of the puzzle. The Young and the Restless spoilers say Nick will make a major confession on Friday. There’s a good chance Chelsea will pry the truth out of him, so she’ll probably unleash her fury soon enough.

Some stunning news will also make its way to Nick and Chelsea. Will that prompt Nick’s admission or will it be unrelated? There’s a Hilary Hamilton (Mishael Morgan) lookalike roaming around town, so that shocker has to spread eventually. However, Nick and Chelsea seem firmly stuck in Newman drama, so they may get updates that relate to Victoria Newman’s (Amelia Heinle) case.

Other Young and the Restless spoilers say Adam will have a gift for Phyllis Summers (Michelle Stafford). She should be both surprised and suspicious of Adam’s motives. Will Adam actually do something kind for Phyllis since she’s the only person in his corner? Even if it benefits Phyllis in the short-term, there’s no guarantee it’ll work out for her in the end. Everything Adam touches seems to bring disaster.

Over with Summer Newman (Hunter King), she’ll lay down the law. It looks like Summer will end up fighting with Theo Vanderway (Tyler Johnson) in a suite, so she may wonder what they’re really doing. Is Summer just going to be Theo’s hookup buddy forever? Summer might demand a commitment if they’re going to stay in each other’s orbit. She could easily grow tired of this casual dance they keep doing.

Then again, Theo might mention his mission to make amends with Kyle Abbott (Michael Mealor). Summer could question if Theo’s sincere and worry about Kyle facing more trouble. She could even take issue with Theo roping Lola Abbott (Sasha Calle) into his plan. The point is Theo and Summer will have a fierce argument, so we’ll see if their romance survives it.

Once Kyle talks to Lola, he should have concerns of his own. She’s sure to mention Thursday’s chat with Theo, so Kyle will have his guard up. His priority is keeping Lola happy and putting the New York secret as far behind him as possible. Unfortunately, Kyle’s marriage will indeed take a serious hit sooner or later.