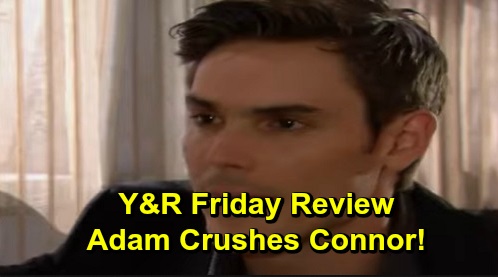 The Young and the Restless spoilers review for Friday, September 27, tease that Adam Newman (Mark Grossman) balked at the idea of attending Victor Newman’s (Eric Braeden) memorial service when Nick Newman (Joshua Morrow) invited him. Of course, it was all part of a ruse orchestrated by Victor, who is hoping that Adam will feel guilty and admit to what he did. Adam will certainly feel guilt, as he breaks down and sobs after Nick leaves, but he’ll quickly pull himself together and decide to leave Genoa City, and his son Connor Newman (Judah Mackey), for good.

Adam will pack his bags, and before he can leave the penthouse, Phyllis Summers (Michelle Stafford) will arrive and berate Adam for leaving and “surrendering.” They’ll argue about the merits of him staying versus leaving, but ultimately he’ll leave, handing her the keys to the penthouse as he does. From there, he’ll go to see Chelsea Lawson (Melissa Claire Egan), and she’ll be furious that Adam is planning on abandoning Connor. They’ll argue, and she’ll tell him that he needs to tell Connor the news himself, and that she won’t do it for him.

The conversation with Connor will be a total disaster. Connor will immediately sense that something is wrong, and Adam will proceed to tell him that he has to leave Genoa City forever and that he’s not coming back. Connor will cry and beg his father to stay, but Adam will say that Connor deserves a better dad than he can be, which will really upset Connor, who will insist that Adam stop saying bad things about himself. Ultimately, Adam will tell him that Nick will be a good father, and Connor will yell that he doesn’t want Nick as a father before running out of the room.

As Adam’s leaving, he’ll get a text from someone and appear to be shocked. He’ll head to the Newman Ranch where he’ll walk into a room where Victor is sitting at a chessboard. “Well, played, Pops,” he’ll say. “Well played.” Of course, whether Adam got intel from a source about Victor, or whether Victor himself summoned Adam remains to be seen, but there should be some intense words between the men forthcoming.

Meanwhile, on the new episode of Y&R on Friday, September 27, Kevin Fisher (Greg Rikaart) will run into Paul Williams (Doug Davidson) at Crimson Lights and promptly ask for his old job back. Paul will initially balk, but Kevin will eventually persuade him to give him another shot. Kevin will want to start by putting his skills to use on Victor’s murder case, and Paul will note that he’s way ahead of Kevin on that.

Paul will then see Michael Baldwin (Christian LeBlanc) and will update him about the pharmacist who was involved in altering Victor’s meds for Adam. Turns out, Paul had her followed all the way to the international terminal at the airport, and when one of his guys reminded her that her immunity deal didn’t include perjury, she had a very different story to tell. Of course, what that “different story” is remains to be seen. Is she now implicating Adam?

Finally, on Friday’s episode of Y&R, Michael will show up at Adam’s penthouse for unknown reasons – perhaps to tip him off about the new story that the pharmacist is telling. At any rate, he’ll end up finding Phyllis there, who will be enjoying her new digs. Michael will want to know where Adam is, and they’ll each think that the other is hiding something. After a little banter, Phyllis will ask Michael what he knows, and Michael will ask her what she’s hiding.