The Young and the Restless Spoilers: Friday, September 6 Recap – Nick Says Chance is Will Challenger – Victor Falls for Adam’s Trick 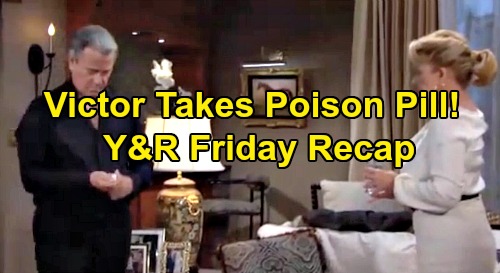 The Young and the Restless (Y&R) spoilers recap for Friday, September 6, tease that Adam Newman (Mark Grossman) will stop by the ranch. He’ll tell Victor Newman (Eric Braeden) he’s looking for a truce and wants another chance, but Victor won’t buy this sudden change of heart. After Victor steps out of the room to take a call, Adam will pull out the pill bottle he plans to swap.

Nikki Newman (Melody Thomas Scott) will waltz in and catch Adam, but he’ll manage to conceal what he’s up to. Soon after, Victor will rejoin them and point out that Adam claims to want a truce. While Victor and Nikki chat with the maid, Adam will sneak the altered pill bottle into Victor’s jacket pocket. Once he’s gone, Nikki will wonder about Adam’s sincerity and remind Victor it’s time for his meds.

While Victor pops a dangerous pill, Y&R spoilers say Adam will head back to his penthouse. He’ll look pensive as he drinks, so perhaps he’ll be battling some second thoughts. At Society, Theo Vanderway (Tyler Johnson) will arrive with Summer Newman (Hunter King) and suggest they should get the party started. They’ll join several others for Abby Newman’s (Melissa Ordway) latest bash.

Kyle Abbott (Michael Mealor) will let Lola Abbott (Sasha Calle) know he’s annoyed as Theo gets a text. It’ll be from Zoe Hardisty (Anna Grace Barlow), who’s on her way. Mariah Copeland (Camryn Grimes) will echo Theo’s line about getting the party started as she walks in with Tessa Porter (Cait Fairbanks). There’ll be some competitive energy going on as Theo brags and Mariah snarks.

Meanwhile, Zoe will show up and assure Chelsea Newman (Melissa Claire Egan) that she must be on the list. After Abby agrees to let Zoe join the festivities, she’ll end up feeling left out for most of the night. Summer will brush off Zoe’s attempt to be besties and seem irritated over Theo not giving her any attention. Zoe will try her luck with Lola and Kyle, but Kyle will drag Lola off to the kitchen.

Later, Abby will push Tessa to sing, but Tessa will only agree if Chelsea and Lola sing, too. They’ll provide some backup as Tessa belts out a new tune called Something in You. Zoe will continue to feel like an outsider, and she’ll eventually push Summer too far. The Young and the Restless spoilers say Summer will feel like Zoe’s beyond clingy. Theo will agree Zoe needs to dial it down, so Zoe will leave in a huff.

At Devon Hamilton’s (Bryton James) penthouse, he’ll do some research on Amanda Sinclair. She’s the lawyer who sent the notice about Katherine Chancellor’s (Jeanne Cooper) will, which is being challenged. Devon will be puzzled about who Amanda’s working for. Nick will pop in briefly to discuss the affordable housing project, so Devon will insist he’s excited about investing.

Next, Jill Abbott (Jess Walton) will arrive. Devon will share updates on the contested will and leave Jill just as perplexed as he is. They’ll talk about how the attorney is challenging Katherine’s mental state. Nick will raise the possibility of it being Chance, who was mixed up with Adam in Vegas.

Jill will mention how Chance Chancellor sent her an email about a lucrative opportunity. Devon will argue that if someone’s coming for his inheritance, they’ll be in for a fight. Back at the party, Nick will arrive in time to catch Chelsea singing. He’ll be impressed, so they’ll share some lovey-dovey moments afterward.

The Young and the Restless spoilers say Chelsea and Abby will finish the night off with a toast. They’ll thank the guests for coming and suggest that the sky’s the limit. Little do they know Phyllis Summers (Michelle Stafford) is going to destroy the Grand Phoenix opening! We’ll keep you posted as other Y&R news comes in. Stay tuned to the CBS soap and don’t forget to check CDL often for the latest Young and the Restless spoilers, updates and news.

PROMO FOR NEXT WEEK!! What a drunken mess! #YR pic.twitter.com/YJUGb7uIju