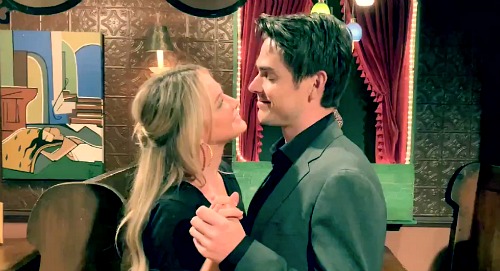 The Young and the Restless (Y&R) spoilers tease that Sharon Newman (Sharon Case) will try to find her purpose during a trip out of town. She hopes to figure things out and return to Genoa City with a fresh perspective. Based on fall preview info, it looks like that journey could lead Sharon back to Rey Rosales (Jordi Vilasuso). She recently admitted she’s got a list of stuff she’d like a mulligan on, and Rey’s at the top of it.

Rey is clearly suffering with a broken heart thanks to their split. Y&R fans can expect fate to keep bringing Rey and Sharon together. They’ll run into each other quite a bit as fall gets underway, so they’ll feel a familiar spark. It’ll leave Sharon and Rey wondering if maybe there’s still a chance for romance.

Of course, Rey will have to get over or at least find a way to cope with his insecurities about Adam Newman (Mark Grossman). As for Sharon, she’ll have to truly stand her ground if she wants this second shot at “Shey.” Sharon has to break the spell Adam has on her if she hopes to earn Rey’s trust and reunite.

Naturally, none of this is what “Shadam” fans want to hear! The Young and the Restless set Sharon and Adam up as the couple to root for, but now they’re seemingly backing off. They had a bit of a love quad going on with Sharon, Adam, Chelsea Newman (Melissa Claire Egan) and Nick Newman (Joshua Morrow). It looks like they’re sliding Sharon out of that to make it a Nick-Chelsea-Adam triangle.

Fortunately, Mark Grossman is looking out for the “Shadam” shippers. On Twitter, he recently posted a behind-the-scenes video from the Crimson Lights set. Grossman can be seen slow-dancing with Case and he added a poignant tune to go with it. Fans of Sharon and Adam went nuts over the adorable clip, which featured the song Someone You Loved by Lewis Capaldi.

“Came for the coffee, left with a dance @sharonlcase,” Grossman said in his tweet. Case loved the video and quickly offered her reply. She said, “Aww!! Great song choice Mark. This video turned out so cute! The puppet in the background is lol!” Case confirmed that the video wasn’t meant to be any kind of spoiler, but Grossman still thought it’d be fun to share – and it certainly was!

However, anything can happen down the road. Adam and Sharon could find their connection too difficult to ignore sooner or later. The Young and the Restless spoilers say some hot drama’s ahead, so stay tuned. We’ll give you updates as other Y&R news comes in. Stick with the CBS soap and don’t forget to check CDL often for the latest Young and the Restless spoilers, updates and news.

Came for the coffee, left with a dance @sharonlcase pic.twitter.com/zghqKYmt0x

Aww!! Great song choice Mark. This video turned out so cute! 💏 The puppet in the background is lol! https://t.co/lAYCjVP3So