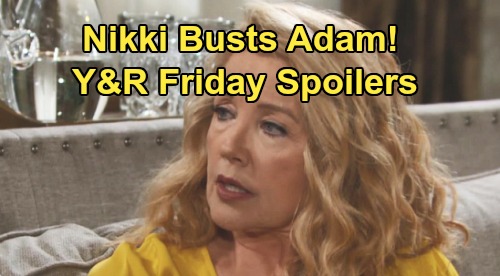 The Young and the Restless (Y&R) spoilers for Friday, September 6, tease that Nikki Newman (Melody Thomas Scott) will make a shocking discovery. She’ll catch Adam Newman (Mark Grossman) red-handed, so this may involve the prescription supply he scores on Thursday. Adam intends to give Victor Newman (Eric Braeden) double the dosage to worsen his side effects, but it seems his swap may go awry.

If Nikki catches Adam trying to switch out Victor’s meds on Friday, she’ll naturally demand some answers. Adam might be able to talk his way out of trouble, but that seems tough since Nate Hastings (Sean Dominic) and Abby Newman (Melissa Ordway) are already onto him. The jig may be up for Adam, but he might find a workaround later.

Then again, Victor could gain the upper hand and use this to set a new trap for Adam. The Young and the Restless spoilers say this battle is just getting started, so don’t be surprised when it takes some nasty turns! On a lighter note, it’ll be time to party at Society. Y&R fans can expect a fun gathering, which will celebrate Abby and Chelsea Newman’s (Melissa Claire Egan) successful partnership.

Chelsea and Abby are almost ready to open the Grand Phoenix, so this will be a pre-opening bash for a smaller crowd. Their good friends will be on hand to mix, mingle and celebrate. Of course, it wouldn’t be a party without a little entertainment. In addition to some toasts and speeches, we’ll hear a brand-new song.

The Young and the Restless just released another tune from Cait Fairbanks (Tessa Porter) at midnight on September 5, which is in preparation for the Canadian airdate of Friday’s U.S. episode. That likely means Tessa will take the stage to sing on Friday, September 6. The song is called Something in You and will offer some of Tessa’s usual love-inspired lyrics.

Although Y&R hasn’t always done a great job of showing Tessa’s perspective, her songs have provided a sweet glimpse into the character’s heart. Clear My Mind expressed Tessa’s deep remorse over hurting Mariah Copeland (Camryn Grimes) along with her desire to change for the better. When I See You revealed how safe Tessa feels with Mariah and explained that everything just makes sense with her.

Love Me allowed Tessa to acknowledge the scars of her past and suggested she’s learning to feel worthy of love. Umbrella was an optimistic tune about forgiveness and leaving behind the darkest days. It was all about how Tessa can survive the storm as long as she’s with Mariah. These songs are undeniable proof of the positive shifts in Tessa, and Something in You will serve as more of the same. It reflects on mistakes and what’s worth fighting for as it describes the war between the head and the heart.

Back with Chelsea and Abby, they’ll be on cloud nine as the prepare for this hotel launch. Unfortunately, Phyllis Summers (Michelle Stafford) has a devious plan in store – and it’s not going to end well. The Young and the Restless spoilers say next week’s opening will bring quite the catastrophe!

It sounds like some fantastic scenes are coming up, so don’t miss all the action. We’ll give you updates as other Y&R news emerges. Stick with the CBS soap and don’t forget to check CDL often for the latest Young and the Restless spoilers, updates and news.