BY hellodrdavis on September 6, 2019 | Comments: one comment
Related : Soap Opera, Spoiler, Television, The Young and the Restless 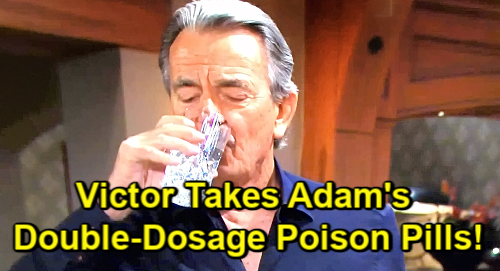 The Young and the Restless spoilers review for Friday, September 6, tease that Adam Newman (Mark Grossman) will appear in Victor Newman’s (Eric Braeden) living room, having been let in by security.

Victor will not be pleased to see Adam, who will proceed to say that he’s been doing a lot of thinking, and that would like to offer a truce. Victor will be immediately skeptical about the whole thing, and he’ll rehash everything Adam has done to the family.

While Adam and Victor bicker about how Adam has rejected and declared war on the family, Adam will eye Victor’s jacket, which is sitting on a barstool across the room. They’ll keep going back and forth, and Victor won’t trust Adam’s sudden change in attitude. Adam will say that he’s wasted too much time and that he wants to devote himself to Connor Newman (Judah Mackey) and he just wants Victor to meet him halfway, as he again eyes Victor’s jacket.

Adam will eventually go to the bar to make himself a drink. He’ll hover around Victor’s jacket while Victor steps out of the room to take a call. Adam will remove Victor’s pill bottle from his jacket and will be about to replace it with a lookalike bottle containing double-dosage pills when Nikki Newman (Melody Thomas Scott) enters the room and asks him what he’s doing, but she won’t see the pill bottle in his hand.

Later, Adam will reflect upon what he did over a drink. But one has to wonder what Adam’s grand plan is. He previously told Phyllis Summers (Michelle Stafford) that he wanted to increase Victor’s side effects to distract the family so they could make their move, but what will that move ultimately be?

Devon Hamilton Wonders Who Amanda Sinclair Is Working For

Meanwhile, on the new episode of Y&R on Friday, September 6, Devon Hamilton (Bryton James) will spend some time looking at the law firm profile for Amanda Sinclair, the attorney for the unknown person who is challenging Katherine Chancellor’s (Jeanne Cooper) will. Devon will learn that Amanda, whose profile includes no photo, is a rising star attorney, but he won’t learn much more. He’ll wonder who she is and who she’s working for.

Nick Newman (Joshua Morrow) will then drop by to talk about the New Hope affordable housing development, then Jill Abbott (Jess Walton) will arrive. Devon will explain to them both that someone is challenging Katherine’s will, but he doesn’t know who it is. They’ll discuss who it could be, and Nick will suggest that perhaps it’s Chance Chancellor (John Driscoll) who’s behind all of this.

Nick will reveal that Adam and Chance were connected in Las Vegas, which will surprise Devon. Jill will share that the recently received a weird message from Chance indicating that he was working on something that could be very lucrative.

She’ll say that she responded back to him, but that he hasn’t returned her message yet, and that it’s not like Chance to be so secretive. Nick will think that maybe Adam has been a bad influence on him.

After Nick leaves, Jill will tell Devon that she hopes Chance isn’t involved in something sleazy. Devon will warn her that if anyone tries to take what Katherine left him, then they’re in for a fight. And it looks like this will pit Devon squarely against this Amanda Sinclair and quite possibly Chance. But on what grounds could Chance possibly be contesting Katherine’s wishes?