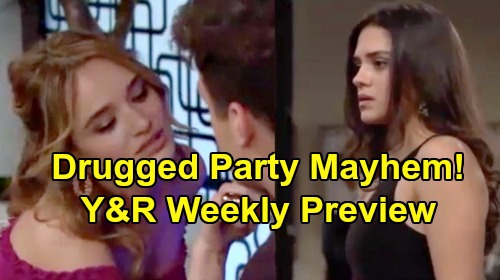 The Young and the Restless (Y&R) spoilers for the week of September 9-13 tease that some wild moments are on the way. The Grand Phoenix opening is sure to be an event Genoa City will never forget! Y&R fans know Phyllis Summers (Michelle Stafford) was cut out of the hotel deal, so she’s definitely holding a grudge. We’ve also got Zoe Hardisty (Anna Grace Barlow), who’s being used and shoved aside.

Zoe ends up leaving Abby Newman’s (Melissa Ordway) party in a huff on Friday, September 6. She’s livid when Summer Newman (Hunter King) calls her out for being so clingy and Theo Vanderway (Tyler Johnson) backs her up. It sounds like Zoe will be on a mission for revenge in the week ahead, so she may once again approach Phyllis as a potential partner in crime.

Phyllis may be more receptive to the idea if Zoe shows how committed she is. She may lay out a detailed plan and get Phyllis on board. Of course, there could also be some Abby and Chelsea Newman (Melissa Claire Egan) gloating that pushes Phyllis into it. Phyllis’ desire for vengeance will grow stronger, so she’ll definitely be part of the disaster that’s set to occur.

At the Grand Phoenix lounge, Chelsea and Abby will have high hopes for the evening. However, it won’t take long for things to go south. Based on a Young and the Restless preview video for next week, September 9-13, it looks like this may be a spiked punch situation. If not, there’ll seemingly be some other way to get the guests drunk or high.

Inhibitions will be released and true desires will rise to the surface. Sharon Newman (Sharon Case) will share a messy kiss with Rey Rosales (Jordi Vilasuso), but neither one should mind all that much. It’s clear that they want to get back together at this point, so this may actually be a positive nudge.

Meanwhile, some of the guests will show off their less than stellar dance moves. Tessa Porter (Cait Fairbanks), Mariah Copeland (Camryn Grimes), Summer and plenty of others will be part of this celebration that goes horribly wrong. By the end of the night, Summer will tell a seemingly sober Kyle Abbott (Michael Mealor) that she misses him. She’ll plant a kiss right as a livid Lola Abbott (Sasha Calle) appears.

This party will bring some laughs and surprises, so don’t miss all the action. The aftermath should be just as fun since Zoe will likely post the most scandalous pics you could imagine. You can bet she’ll make Abby and Chelsea’s worst nightmare go viral.

On a more somber note, Victor Newman’s (Eric Braeden) side effects will get worse – just as Adam Newman (Mark Grossman) wanted. His dad will be taking double the dosage thanks to his sneaky swap. Nikki Newman (Melody Thomas Scott) will grow concerned when Victor has a weak spell at Crimson Lights. The Young and the Restless spoilers say Victor will slump back in his chair as he struggles, so Nikki may insist on getting Victor to the hospital ASAP.

Regardless, this will provide quite a scare for the Newmans. Until Adam’s scheme is exposed, Victor’s only going to get worse! We’ll give you updates as other Y&R news comes in. Stay tuned to the CBS soap and don’t forget to check CDL often for the latest Young and the Restless spoilers, updates and news.

PROMO FOR NEXT WEEK!! What a drunken mess! #YR pic.twitter.com/YJUGb7uIju