BY Heather Hughes on June 9, 2019 | Comments: one comment
Related : Soap Opera, Spoiler, Television, The Young and the Restless 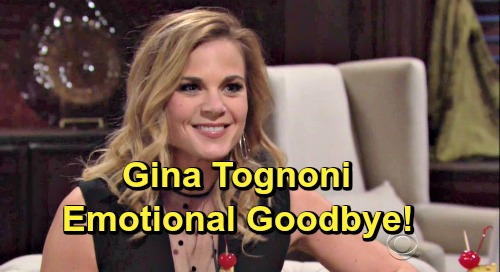 The Young and the Restless (Y&R) spoilers reveal that Gina Tognoni has wrapped her run as Phyllis Summers on the CBS soap. Her final scenes aired on Friday, June 7, so Tognoni took the opportunity to acknowledge the end of her stint and thank everyone. She offered some heartfelt words as well as some pics and a video on Instagram.

To start, Tognoni posted footage of the cast and crew breaking into applause after they yelled cut. She was clearly touched by the love and support she received. That goes for Y&R fans at home, too! Tognoni’s caption said, “That’s a wrap!! Just after today’s scene .I am so grateful for everyone who took the journey with My Phyllis…see you soon (More photos to come).”

Tognoni followed up with more pics as promised, including some of Jason Thompson (Billy Abbott). The Young and the Restless viewers know Tognoni and Thompson spent a great deal of time working together thanks to the “Philly” pairing. Even though Tognoni’s last day happened to be Thompson’s day off, he still came into the studio to bid his friend and costar farewell.

“BTWv@myjasonthompson showed up with his babies and beautiful wife for my last scene… on his day off!! Incredible human incredible , cast and crew,” Tognoni said. Thompson quickly offered an absolutely perfect reply. “It was you that always showed up,” Thompson insisted. Most Y&R fans would agree with that! Tognoni has given her all in this role, even after being abruptly fired.

Sharon Case (Sharon Newman) also had some sweet parting words for Tognoni. Phyllis and Sharon don’t exactly get along, so that’s always brought some fun scenes for their portrayers – who seem to get along splendidly. Case sent out a caring tweet filled with nothing but love and praise for Tognoni.

“You touched my soul…you respect others and your craft, you are a complex artist and I learned so much from you,” Case said at the conclusion of her post. “I don’t know how to say goodbye. I can only reverently say, Bravo!!”

Tognoni’s costars are certainly sharing the same thoughts that most of us are feeling! It’s tough to lose a great performer like Tognoni, but we can be thankful for her impressive run. Michelle Stafford is already back on set filming in her old role, so fans of classic Phyllis will await her onscreen return.

Just a few more .. BTWv@myjasonthompson showed up with his babies and beautiful wife for my last scene… on his day off!! Incredible human incredible , cast and crew ❤️

That’s a wrap!! Just after today’s scene .I am so grateful for everyone who took the journey with My Phyllis ❤️ see you soon (More photos to come)