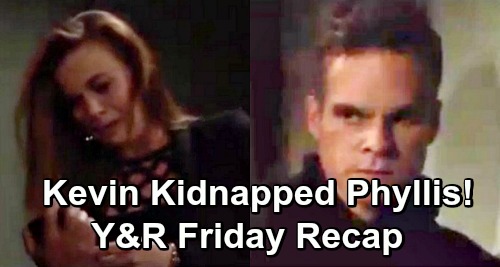 The Young and the Restless (Y&R) spoilers and recap for Friday, June 7, tease that Rey Rosales (Jordi Vilasuso) will remain wary of Adam Newman (Mark Grossman). At home, Sharon Newman (Sharon Case) will mention that she couldn’t find Adam at the tack house. She bumped into Phyllis Summers (Gina Tognoni) instead, so she’ll be worried about Adam getting sucked into drama.

Rey will think Adam might suck Phyllis into his drama instead. The topic of Chloe Mitchell (Elizabeth Hendrickson) will come up again, which will lead Rey to offer a warning. Adam doesn’t seem afraid of anything, so he’ll just want Sharon to be careful.

Other Young and the Restless spoilers say Adam will stand his ground. He’ll insist that Nick Newman (Joshua Morrow) will have to choose between Dark Horse and Christian Newman (Jude and Ozzy McGuigen). Nick will make it clear that he’s not giving up his son, even if it means losing his company.

Adam won’t appreciate the “my son” comment. He’ll remind Nick that Christian belongs to him and rant about Nick denying the boy his father’s love. Nick will feel like Adam’s handled this all wrong. Instead of trying to get to know Christian over time, Adam barged in and made demands.

Nick will give Adam a picture of Christian and warn that’s as far as it goes. Since Nick’s made his choice, Adam will promise he’s going to regret it. At Devon Hamilton’s (Bryton James) penthouse, Jett Slade (Gilbert Glenn Brown) will prepare to head out on tour. He’ll bid Elena Dawson (Brytni Sarpy) farewell before he goes.

Devon will wonder if Elena is going to finish her residency now. She won’t have plans for that at the moment, but she’ll admit she intends to go on some job interviews. Elena will want to move out since she was only there to care for Jett, but Devon will try to convince her to stay.

After dinner and dancing, Devon will insist he doesn’t want to lose Elena. Things will eventually turn passionate, so they’ll head upstairs to make love. Devon will see a vision of a disapproving Hilary Hamilton (Mishael Morgan) when they’re done, but she’ll vanish soon enough. He’ll let Elena know he doesn’t have any regrets as Hilary pops up once again.

Over with Kyle Abbott (Michael Mealor) and Lola Rosales (Sasha Calle), they’ll enjoy some ice cream as they cuddle on the sofa at home. Kyle will feel like it was a mistake to propose before he got a ring and asked for Rey’s blessing. Lola won’t love the idea of Kyle asking for her brother’s approval, but Kyle will insist he has to. She’ll get on board, so they’ll get frisky.

At Society later, Abby Newman (Melissa Ordway) will have some congratulatory words for Lola. Jack Abbott (Peter Bergman) will also meet with Lauren Baldwin (Tracey E. Bregman) and Michael Baldwin (Christian LeBlanc). After Michael gets called away, Jack will ask Lauren what the couple’s secret to happiness is. Lauren will admit she knows what it’s like to lose Michael, so she’s even more grateful to have him.

Once Jack and Lauren exchange compliments, Lauren will let Jack know there’s the perfect gal out there for him. At the cottage, Sharon will be stunned when Nick drops by and reveals Adam’s ultimatum. Rey will be on hand to get updates as well. When Sharon mentions that she saw Phyllis at the tack house, Nick will put it together that Phyllis helped Adam achieve his goal.

After Nick heads out, Sharon will discuss Adam’s history with Rey and how they were kindred spirits before. She’ll confess that she’s become disappointed him. Back at the tack house, Adam will gaze at Christian’s pic before a text comes in. Someone will ask for Adam’s ETA, so he’ll let this person know he’ll be there as soon as he can.

At the coffeehouse, Kyle will try to sell Rey on the idea of a “Kola” marriage. Y&R spoilers say Rey won’t like it, but Kyle will insist Lola isn’t like Mia Rosales (Noemi Gonzalez). He’ll have high hopes for their future and contend that he’s always going to take care of Lola.

Kyle will suggest that goes for their kids someday, too. Rey will eventually surrender and admit Kyle’s part of the family now. That’ll lead Kyle back home to share the good news with Lola, so they’ll excitedly discuss their wedding plans.

At Nick’s house, he’ll talk to Michael about the Dark Horse situation. Michael will point out that Adam doesn’t care about Dark Horse, so he might be willing to sell it. What Nick really needs is an investor to come in and help him like a white knight.

Finally, an unconscious Phyllis will be dragged into what appears to be a basement. She’ll be tossed onto a mattress before her kidnapper locks up. The Young and the Restless spoilers say Kevin Fisher (Greg Rikaart) will be on the other side of the door as Phyllis wakes up and cries out.

It sounds like some exciting scenes are ahead. We’ll keep you posted as other Y&R details emerge. Stay tuned to the CBS soap and don’t forget to check CDL often for the latest Young and the Restless spoilers, updates, and news.

PREVIEW FOR NEXT WEEK! #YR pic.twitter.com/al6SNmG9XP