The Young and the Restless Spoilers: Elizabeth Hendrickson Returns To Y&R Set – See How Chloe’s Written Back Into the Story 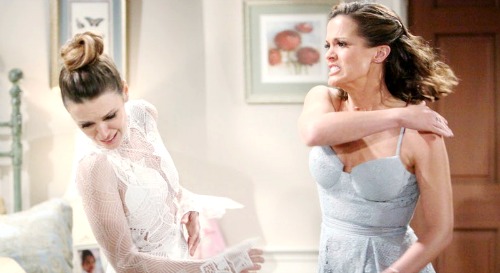 The Young and the Restless spoilers document that Elizabeth Hendrickson (Chloe Mitchell) is leaving the cast of General Hospital, where she’s been portraying Margaux Dawson since 2018. That news enables Y&R’s writing staff to pursue various creative options.

There are many possibilities that can be explored as to how Chloe returns to Genoa City, Wisconsin. Let’s explore some of them now that speculation regarding this infamous character’s reboot is over.

It’s not yet known exactly when Chloe will reappear. But soap operas record episodes six weeks in advance. So it would seem reasonable for fans to see her as early as late July, assuming Hendrickson returns to Y&R immediately after the expiration of her GH contract.

When Chloe was last seen in 2017, Victor Newman (Eric Braeden) was agreeing to allow her, Kevin Fisher (Greg Rikaart), and their daughter, Bella Mitchell (Cali May Kinder), to escape justice and head to the west coast where they’ve apparently been living ever since. That unusual demonstration of compassion allowed Victor to be the only one, other than Khloe, to know that Chloe faked her death.

Adam has been seen speaking to an unknown guy who tracked Chloe down. Like his father, Adam is aware that Chloe is alive.

An easy projection would have Adam’s henchman nab Chloe and drag her back to town, where she’d face charges for attempted murder. Justin Hartley’s (Adam) edition of the character Grossman now embodies was seemingly killed in a cabin blast that Chloe caused in September 2016.

Considering the number of times Chloe has attempted to seek reprisal against Adam it would also be logical to believe she’ll return on her own accord. Hendrickson’s alter ego is brazen enough to disguise herself, as she’s done in the past, and attempt to finish Adam off again.

Victor is currently trying to help his children to get along. Possibly he will use his own private security forces to coerce a meeting between Adam, Chloe, Chelsea, and Kevin. The Moustache knows that the bad blood between this foursome must be resolved so Adam can move on with his life.

Beyond the above, Esther Valentine (Kate Linder), who recently saw Adam at Crimson Lights, could serve as a contact for Chloe. Esther doesn’t know her daughter is alive, but should. Her concern could prove helpful as the latest comeback story accelerates in GC.

Are you excited to have Elizabeth Hendrickson back on Y&R? CDL is a leading source for everything linked to The Young and the Restless. Check back regularly for Y&R spoilers and news!