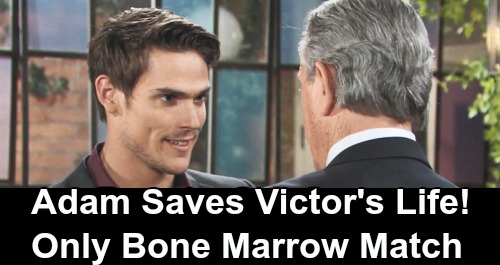 The Young and the Restless (Y&R) spoilers tease that Adam Newman (Mark Grossman) will continue his reign of terror. Of course, Y&R fans know Adam’s not all bad.

He’s just a complicated guy who desperately wants his family back, but his methods to achieve have been awfully ruthless. Things are only going to get worse, as Adam revs up his threats and manipulates the situation from every angle.

Fortunately, there could be a gentler Adam waiting on the other side of this mess. Nobody wants a completely soft and cuddly version, but Adam can’t stay in his current state forever.

We still need a guy we can root for once he reunites with the family he wants so much – whether that includes Christian Newman (Jude and Ozzy McGuigen) or not. Y&R viewers need to see Adam’s softer side again for love stories as well.

How could The Young and the Restless bring about a change in Adam? One easy way is to use the current family medical crisis. Victor Newman (Eric Braeden) has a serious illness, and the diagnosis revealed in the episode airing June 5.

After being confronted by Nikki Newman (Melody Thomas Scott), Victor confesses that he has a rare blood disease. That could offer a clue about where this storyline’s headed.

Will Adam Newman Be A Match?

It makes sense for this blood disease to potentially require a bone marrow transplant. Naturally, all Victor’s family members would get tested in hopes of saving him. If that happens, how much would you be willing to bet Adam would be the only match? It would be the perfect chance for Adam to be the hero and gain his family’s approval – at least somewhat!

There might be a little more drama first though. Adam could always try to use his bone marrow as leverage to get what he wants. He could refuse to help Victor unless his siblings gave him his original demands and perhaps a few more. However, Adam might change his mind in the end. Maybe almost losing his dad will warm his cold heart and make him see he has to shift his perspective.

The Young and the Restless spoilers say Victor’s illness could indeed bring the family together, so Adam’s decision to help might be part of that. One thing’s for sure: Victor will favor Adam more than ever if his beloved son saves his life.