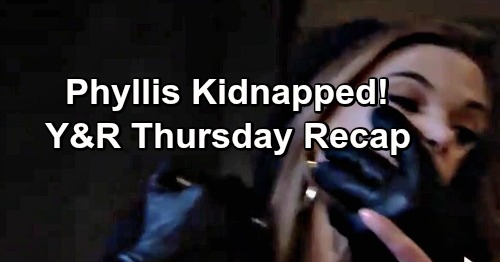 The Young and the Restless (Y&R) spoilers for Thursday, June 6, tease that Phyllis Summers (Gina Tognoni) will play hardball on her hacking fee. Once she gets Adam Newman (Mark Grossman) to agree on $2.5 million and the money’s transferred, Phyllis will get to work. Her conscience will nearly cause a delay, but Adam will fuel the flames of vengeance again and keep Phyllis focused.

After Phyllis accesses the Dark Horse servers, Adam will find exactly what he needs to gain the upper hand. He’ll decide to buy the company’s loan debt and hold it over Nick’s head. Once Adam handles everything by phone, Phyllis will point out how much Christian Newman (Jude and Ozzy McGuigen) means to Nick Newman (Joshua Morrow). Adam will have to head out, but he’ll tell Phyllis to lock up as she leaves.

At Dark Horse, Nick will get some shocking updates from Rey Rosales (Jordi Vilasuso). He’ll find out Adam’s been looking for Chloe, which will puzzle him since she’s supposedly dead. After Nick notes Chloe tried to kill Adam, Rey will suggest that maybe she tried again.

Nick will think Adam’s trying to follow a trail that’ll lead him to Chelsea Newman (Melissa Claire Egan) and Connor Newman (Gunner and Ryder Gadbois). A little later, Adam and Nick will face off over the loan that was purchased, which totals $27 million. Y&R spoilers Adam will insist he owns Nick. He’ll give Nick 24 hours to choose between Dark Horse or Christian.

At home, Rey will bring Sharon Newman (Sharon Case) up to speed on the Chloe situation. It’ll lead Rey to wonder how far Adam will go to achieve his goals. Afterward, Sharon will head over to the tack house and find Phyllis on her way out.

The Young and the Restless spoilers say Phyllis will shut down Sharon’s questions. She’ll advise Sharon to ask Rey instead since he’d probably like to know how concerned she is about Adam. In a suite later, someone wearing all black will sneak up behind Phyllis and stun her with a needle injection.

At Society, Lola Rosales (Sasha Calle) will think Kyle Abbott’s (Michael Mealor) proposal is happening too fast. He’ll eventually realize he’s being an idiot, so he’ll fret to Jack Abbott (Peter Bergman) while Lola visits Rey. Her big bro will agree it’s too soon, but Lola will fear she spooked Kyle by running away. She’ll head off to smooth things over ASAP.

Over with Summer Newman (Hunter King), she’ll overhear Kyle telling Jack about his ill-advised proposal. Summer will seem glum about it as she talks to Theo Vanderway (Tyler Johnson), but she’ll contend that maybe it’s for the best. She contends that the boring people can get married while she has all the fun. Lola will happen to eavesdrop on Summer’s comments.

At home, Kyle will hang up an “I’m sorry” banner in hopes of fixing this. However, Lola will have a change of heart thanks to Summer’s reaction. She’ll decide to say yes to Kyle, so they’ll celebrate their new engagement by making love.

At Crimson Lights, Tessa Porter (Cait Fairbanks) will worry about her upcoming performance at Society. She’ll feel like a broken guitar string is a bad omen, but Mariah Copeland (Camryn Grimes) will offer reassurance. When Devon Hamilton (Bryton James) summons Tessa for a meeting, Mariah will insist on going instead. That way Tessa can concentrate on performance prep.

Once Mariah arrives at the penthouse, she’ll explain why she came instead and clear the air about what happened with Ana Hamilton (Loren Lott). Devon will agree that while Ana and Tessa are both talented, perhaps it wasn’t a good fit. Mariah will also mention that she’s decided to leave GC Buzz. She’ll want to do something creative where she can work behind the scenes, so Devon will have suggestion.

The Young and the Restless spoilers say Devon will give Mariah a job offer. He’ll think she’d be the perfect person to run Power Communications, Neil Winters’ (Kristoff St. John) PR company. Mariah won’t think she’s got the necessary qualifications, but Devon will sell her on the idea.

Back at Society, Tessa will pull off a successful performance. Soon after, Mariah will fill Tessa in on the Power Communications job and leave her thrilled. It sounds like Mariah’s ready to rise to the challenge. We’ll keep you posted as other Y&R news comes in. Stay tuned to the CBS soap and don’t forget to check CDL often for the latest Young and the Restless spoilers, updates, and news.