BY Heather Hughes on May 3, 2019 | Comments: 3 comments
Related : Soap Opera, Spoiler, Television, The Young and the Restless 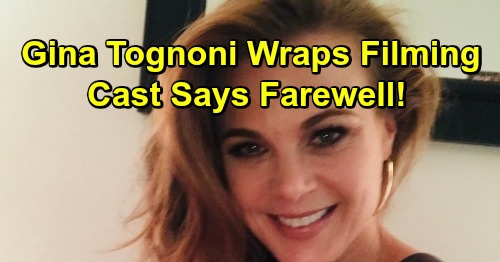 The Young and the Restless (Y&R) spoilers reveal that there’s some sad news to pass along. Gina Tognoni (Phyllis Summers) has officially wrapped filming at the CBS soap. We knew this day would come, but it’s still tough to think about! Tognoni has done a stellar job during her nearly five years as Phyllis, so many Y&R fans are disappointed to see her go.

Of course, other viewers are thrilled about Michelle Stafford’s return to the role. Stafford is finishing out her contract at General Hospital this month, and then she’ll head back over to The Young and the Restless. For some fans, classic Phyllis is their favorite and always will be. They’ll undoubtedly be looking forward to the much-talked-about Phyllis swap of 2019.

There’s even a third category of viewers who find the whole thing bittersweet. Stafford has that certain nostalgia factor, but Tognoni made the role her own. You can be happy about Stafford’s comeback and still be bummed that Tognoni has to leave. It’s a tricky situation if you’re a longtime, ride-or-die Phyllis lover!

No matter which group you fall in, it’s nice to know the cast came together to bid Tognoni farewell. The Young and the Restless had a fun sendoff party for Tognoni, so she gathered with the gang once more and said her goodbyes. Tognoni’s been a real champ throughout all of this. She’s a Daytime Emmy winner who earned loads of supporters with her portrayal, so she’s going out on a high note.

There’s no word yet on when Tognoni’s last airdate as Phyllis will be. As the actual day draws closer, more details will emerge. Until then, many Y&R watchers will enjoy every minute of Tognoni’s final scenes. The Young and the Restless spoilers say Phyllis will cause serious May sweeps drama, so Tognoni has some good material left to air before the end of the road.

How do you feel about Gina Tognoni being replaced by Michelle Stafford? Do you support the decision or is it a bad call? We’ll give you updates as other Y&R news comes in. Stay tuned to the CBS soap and don’t forget to check CDL often for the latest Young and the Restless spoilers, updates, and news.

Just a few photos from an incredible evening last night (more to come ) A celebration of five years with my #YR family. My heart is Full !! 🙏