BY Marcy Cohen on March 13, 2019 | Comments: one comment
Related : Comings & Goings, Soap Opera, Spoiler, Television, The Young and the Restless 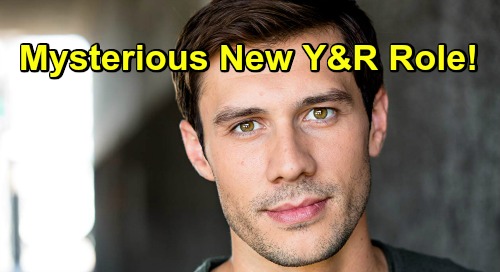 The Young and the Restless (Y&R) spoilers tease that a new face is headed to Genoa City. Andy Shephard has booked an exciting new role at Y&R, so it should be interesting to see who he’s playing and what kind of drama he’ll fit into. There’s no shortage of options since several shocking storylines are cooking on the CBS soap.

Of course, you’ve probably heard by now that The Young and the Restless is seeking a new Adam Newman. The recast process has been happening behind the scenes, but it’s doubtful Shephard will be filling that role. When a new Adam has officially been found, fans should hear about it in a big way. That seems like the kind of thing that would bring an exclusive article and interview somewhere.

Plus, word has it the show wanted someone with strong acting credits. Andy Shephard’s mainly done guest spots and handful of short films, so he’s not a great candidate. Instead, Shephard likely booked one of the spring roles that’s up for grabs.

Y&R’s seeking hot male models for some upcoming scenes. They’re also looking to cast some swanky poker players along with some upscale restaurant staff members and patrons. Those patrons are expected to dress especially stylish, so that lines up with the swanky bar and eatery Abby Newman (Melissa Ordway) has in mind.

Abby has been preparing for the opening of her new restaurant, which Devon Hamilton (Bryton James) is backing. Lola Rosales’ (Sasha Calle) chef gig is in jeopardy, but let’s hope Abby can fight for Lola’s future there. She doesn’t deserve to have her dreams derailed because of Mia Rosales’ (Noemi Gonzalez) vicious behavior.

However, Devon will keep pushing for a replacement if Lola can’t recover in time. This could certainly cause conflict with Arturo Rosales (Jason Canela), but the restaurant will move forward no matter what. Shephard could easily play a role in the action there or in another hot story.