The Young and the Restless Spoilers: J.T. Crisis Shocking Shift – Victor Destroys Lives To Save Family 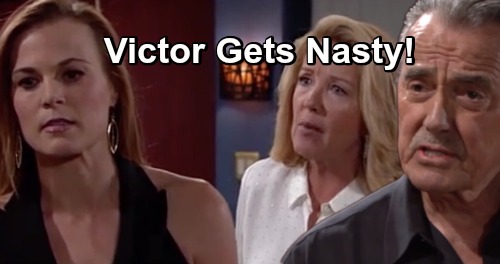 The Young and the Restless spoilers tease that Nikki (Melody Thomas Scott) has had one goal from the beginning. While first acting on pure parental instinct, Scott’s embattled character has since been protecting her family. Now, as the J.T. (Thad Luckinbill) crisis builds, Victor’s (Eric Braeden) guile, in particular, will be needed to save the entire Newman family.

Vickie (Amelia Heinle) was J.T.’s target. Why Mr. Hellstrom quickly devolved into a one-dimensional monster remains a mystery to Y&R fans. But what’s never been in question was Nikki’s response to the life-threatening situation Vickie was in when the coverup crew raced up the stairs and burst into the now infamous bedroom scene.

Having already physically assaulted Vickie, J.T. then went further wild. He was refusing to allow Vickie to use the phone to contact the authorities and seemed capable of committing murder himself. So, Nikki picked up the fire place poker and bludgeoned Luckinbill’s spectacularly played character over the back of the head.

J.T. fell motionless on the floor and within moments Phyllis (Gina Tognoni) was urging everyone to not report what happened, but instead to get rid of the body. Nikki recalled excavation at her Chancellor Park property and the unlawful burial soon followed.

As Rey (Jordi Vilasuso) moves closer to learning the truth, Victor and Nick (Joshua Morrow) are finally in on what happened last April. Beyond simply unburdening their souls, Nikki and Vickie gained powerful, infinite allies who will do all that’s possible to see that justice is shifted.

Nikki’s desire to protect Vickie and now, the rest of her family, is steeped in the initial act that was memorably scripted more than nine months ago. No one threatens a Newman without paying some type of price. For J.T., that meant his life. For Rey, well, a different tact seems likely to be taken against him.

Victor is currently framed for J.T.’s murder. He’s content with allowing that rap to stick so he can keep Nikki safe from whoever has been tormenting her these past months.

Nick is now able to consider who, among all Newman family enemies, would be capable of pulling off such a complex task. He’s thought of enemies more recent and past, along with Phyllis, who as a coverup crew member seems motivated to offer Victor as a sacrifice to save her own skin.

With four Newman’s clued into J.T.’s death storyline, a different dynamic now exists. The crisis that’s building might not necessarily involve the Newman family, but instead force pressure upon whoever is tormenting Nikki and is attempting to pin J.T.’s murder on Victor.

Anyone who knows the Moustache, or has watched him through the years, knows that he’ll literally do anything to protect his family. And that’s what’s about to begin. CDL is a leading source for everything linked to The Young and the Restless. Check back regularly for Y&R spoilers and news!