The Young and the Restless Spoilers: Jack Turns Against Theo After Lola Cheating Scandal – Finally on Kyle’s Side After Betrayal? 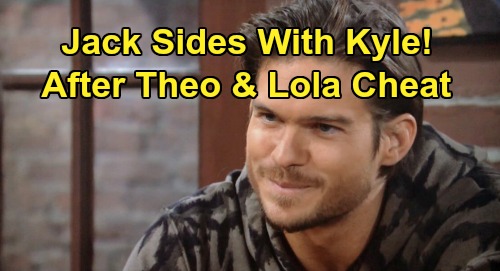 The Young and the Restless (Y&R) spoilers tease that Jack Abbott (Peter Bergman) and Kyle Abbott’s (Michael Mealor) tension will rev up. Ever since Theo Vanderway (Tyler Johnson) became part of the family, Jack’s been firmly on “Team Theo.” Now that Dina Mergeron (Marla Adams) is fading, Jack must feel like Theo is a way of keeping her fighting spirit alive. He can see a lot of the same ambition and fire within Theo, so he’s got a soft spot for him.

Theo has indeed eased up on his scheming and doesn’t have quite the same smug attitude he used to. He’s still a little on the cocky side, but that’s just part of who he is by now. Even so, Theo’s recent career struggles seem to have humbled him a bit. He’s also been overwhelmed over being a sudden family addition, so fans have seen a gentler Theo lately.

However, Jack’s affection toward Theo may not last forever. He’s rushing into this whole “Theo is family” thing and risks alienating his son in the process. Jack should’ve taken Traci Abbott’s (Beth Maitland) advice early on. She felt like Jack needed to slow down and let this happen a bit more naturally. Instead, Jack just kept revving up the pressure to make Theo a family member ASAP.

In some ways, Jack’s acting like Theo is his long-lost son instead of his nephew. It’s probably going to fuel Kyle’s competitive side in the coming weeks. Will Kyle eventually get himself fired at Jabot? It’s within the realm of possibility since he can never get along with Theo. Kyle promised to give Theo a chance to prove himself, but it won’t be long until that plan goes right out the window.

Y&R spoilers say Jack will keep siding with Theo for a while, but there’ll inevitably be something that changes his mind. After all, they can’t keep all this bonding up forever. Will there be an incident that finally makes Jack see the light? Will he get back on “Team Kyle” after Theo’s next blunder?

The Young and the Restless spoilers say Lola Abbott (Sasha Calle) will remain in Theo’s corner, so that’s bound to spell trouble. The writing’s on the wall for a potential Theo and Lola hookup. Cheating is something Jack’s been affected by on more than one occasion, so he knows the sting of it all too well. That could be what finally turns Jack against Theo and makes him realize Kyle was right to worry.

Will Jack and Kyle eventually unite against Theo? Will a Lola cheating scandal bring chaos for the Abbott family? The Young and the Restless spoilers say some exciting drama’s ahead, so stay tuned. We’ll give you updates as other Y&R news comes in. Stick with the CBS soap and don’t forget to check CDL often for the latest Young and the Restless spoilers, updates and news.