BY Heather Hughes on November 25, 2019 | Comments: one comment
Related : Soap Opera, Spoiler, Television, The Young and the Restless 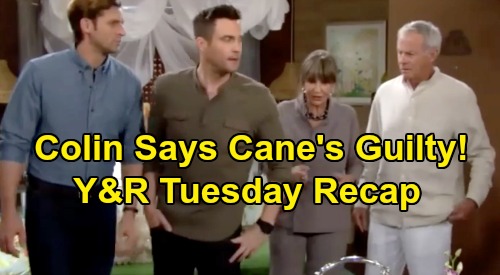 The Young and the Restless (Y&R) spoilers recap for Tuesday, November 26, teases that Devon Hamilton (Bryton James) will open up to Nick Newman (Joshua Morrow). Devon will talk about possibly being scammed out of his billions, so Nick will have some questions. Once Devon explains the suspicions surrounding Colin Atkinson (Tristan Rogers), Nick will feel like this is about more than the money. Devon will admit he’s struggling over getting duped.

After Devon wonders what that says about him, he’ll get reassurance from Nick. Devon may have been tricked, but he’s still honest and smart. Nick won’t think letting himself get conned changes anything. In the Maldives, Phillip “Chance” Chancellor (Donny Boaz) will arrive and leave Jill Abbott (Jess Walton) annoyed. She’ll insist Chance made the trip for nothing since Colin simply righted a wrong.

Chance will insist Cane Ashby (Daniel Goddard) doesn’t deserve any of Katherine Chancellor’s (Jeanne Cooper) money. Suddenly, Cane will show up to join the showdown. Once Chance keeps revving up the pressure, Colin will blurt out that it was all Cane’s idea. He’ll contend that Cane was the mastermind. An appalled Cane will argue that Colin’s just trying to save himself, but Colin will insist Cane hired Amanda Sinclair (Mishael Morgan).

Jill will be horrified by the accusation, but Cane will maintain that it’s not true. As proof, Colin will suggest he got the money for his current trip by draining Cane’s account. He’ll toss his glass to the floor and try to make a run for it, but Chance and Cane will stop him. Jill won’t know what to believe anymore, but Cane will insist he’s going to get justice for Devon and clear his own name.

In Genoa City, Adam Newman (Mark Grossman) will see that Chelsea Lawson’s (Melissa Claire Egan) been busy at the penthouse. Chelsea needed a distraction, so she rearranged things to make it look like when she lived there. They’ll talk about Connor Newman (Judah Mackey) going back to school, and Adam will be pleased that they’re working together to help him.

Chelsea will fret over it not being enough. She’ll also dodge Adam’s attempts to talk about Nick, but Adam will still try to ease her guilt over the mess. At the Grand Phoenix, two women will check in and hope for some drama. They’ll be excited over the scandals in the news lately and mention the real jewels they’ve brought to the hotel. Abby Newman (Melissa Ordway) will advise the ladies to keep the jewels in their suite’s safe.

Afterward, The Young and the Restless spoilers say Abby will talk to Chloe Mitchell (Elizabeth Mitchell) about Chance. Since Chloe was engaged to him years ago, she can attest to how trustworthy and kind he is. Chloe will insist that if Abby thinks he’s a bad boy deep down, she’s going to be disappointed. Chance will always be one of the good ones in Chloe’s book.

Later, the ladies will be hysterical over getting robbed. Their jewels are gone, but they’ll refuse to let Abby and Chloe notify the police. The women will claim they deceived their husbands about this trip and don’t want to alert them. Of course, there’s a possibility these ladies are faking the crisis for attention. Maybe they couldn’t find the drama they wanted and had to make some of their own.

At Crimson Lights, Adam and Chelsea will still be in shock over the principal’s suggestion. They were advised to homeschool Connor, so that’ll be a lot for these parents to take in. Sharon Newman (Sharon Case) will insist that Connor’s emotional needs have to be the priority. She’ll feel confident that they’ll see improvements in time.

After Chelsea steps away for Nick’s call, Sharon will admit she feared she didn’t have enough experience for this. However, she’ll be glad to help since she’s really connected with Connor. As for Chelsea, she’ll dismiss Nick’s offer to help and insist she’s got it covered with Adam. When Chelsea walks back over, Sharon will urge Chelsea and Adam to stay strong.

Once they’re alone, Adam to once again push Chelsea to stop beating herself up. He’ll know he played a role in Connor’s issues as well, but they can only move forward and do better. Back with Sharon, Y&R spoilers say she’ll meet up with Nick at Society. Sharon will point out that Chelsea and Adam genuinely seem to be putting Connor first.