The Young and the Restless Spoilers: Jordi Vilasuso Reveals Y&R Future – Is Rey Sticking Around? 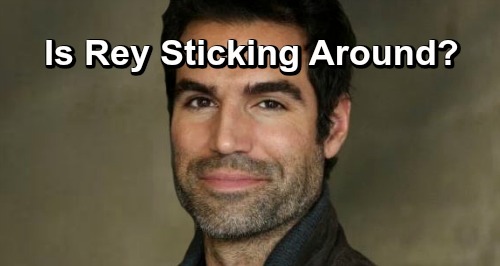 The Young and the Restless (Y&R) spoilers reveal one CBS soap star is shutting down concerns about his potential exit. When a new regime comes in and makes big changes, there are always worries about who might be on the chopping block. You just never know what kind of shakeups will strike.

Whether you support these changes or not, they’re indeed happening. Since two Rosales family members were dropped, that’s left some viewers worried about the remaining ones. There’s no word on what Lola Rosales’ (Sasha Calle) future will look like, but Jordi Vilasuso (Rey Rosales) set the record straight about his own. On Twitter, Vilasuso reassured a fan who feared he’d hit the road soon.

“Not going anywhere,” Vilasuso said. That makes considering Rey’s love story with Sharon Newman (Sharon Case) is just now taking off. They’ve been building to this for what feels like forever, so The Young and the Restless needs to follow through. “Shey” seems to have quite a few fans out there, so that’s a good thing, too.

Vilasuso hits the soap sweet spot in terms of his age and good looks. It never huts to have an extra hunk around in Genoa City. Since Rey’s got detective skills, he’s useful for investigative stories as well. Rey may rejoin the GCPD full-time eventually, but he could always focus on PI work if he doesn’t.

The Young and the Restless spoilers say Rey will be looking into Victor Newman’s (Eric Braeden) secret for Nikki Newman (Melody Thomas Scott), so that’s a nice start. Things could change down the road, but Vilasuso is confident in his status at Y&R right now. It looks like plenty more story opportunities are headed his way, so stay tuned.

What do you think about Y&R’s decision to keep Jordi Vilasuso? Do you like Rey and want him to stick around indefinitely? We’ll give you updates as other news comes in. Stick with the CBS soap and don’t forget to check CDL often for the latest Young and the Restless spoilers, updates, and news.