The Young and the Restless Spoilers: Kerry Shocker Explodes in Phyllis’ Face – Ashley and Traci Return for Abbott Family Drama 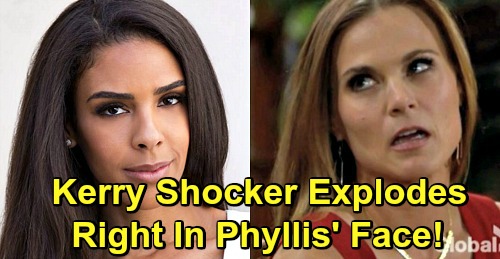 The Young and the Restless (Y&R) spoilers tease that serious Abbott family drama’s ahead. It’s been all about the Newmans for a while, but it’s almost time for things to swing back around. Genoa City’s other powerful fam will take center stage for some shockers and shakeups in the coming months.

Eileen Davidson will be reprising her role as Ashley Abbott later this month, so that’s something viewers can look forward to. Is Ashley the mysterious boss that Kerry Johnson’s (Alice Hunter) been in touch with? Kerry’s contact is listed as “PC” in her phone, but she obviously wouldn’t use anything too close to Ashley’s real initials. PC may be some code that they’ve worked out between them.

Since Phyllis mentions her plot to take down Ashley’s new company in Wednesday’s episode, that certainly seems like a hint about where this is going. Phyllis tells Kerry about her plan to neutralize My Beauty, so Kerry will soon have all the details and can prevent that if she’s working with Ashley.

This lines up with Kerry’s previous text about having Jack Abbott (Peter Bergman) and Phyllis Summers (Gina Tognoni) right where they want them. Ashley seemingly made peace with Jack before she left, but she was obviously still upset enough to take off. Since she was willing to take her patents and head to Paris, Ashley could be playing dirty to make sure My Beauty has the best chance for success.

Beth Maitland (Traci Abbott) filmed some Y&R scenes last month that’ll probably be coming up around the time of Ashley’s return stint. Ashley should be hitting town on March 29 and April 1 thanks to a preemption adjustment. It’s possible that’ll mark a big reveal for Ashley and set up Kerry’s imminent exit.

Regardless, Kerry and her boss could do some serious damage at Jabot. When you combine that with the scandal Phyllis has brought on the company, things could get awfully risky. Jack and his family may have to band together to keep Jabot afloat. He’d undoubtedly count on Billy Abbott (Jason Thompson) and Kyle Abbott (Michael Mealor) to come through for him.

Abby Newman (Melissa Ordway) might get involved, especially if she feels she can somehow talk some sense into her mom. This is a good opportunity to get Abby mixed up in Ashley’s chaos. The Young and the Restless spoilers say Traci has even more scenes coming up down the road. Maitland’s recent social media posts indicate that she’s on set filming this week, so next month should bring more Abbott mayhem.

This family may be in crisis mode for a while, but it’s nice they’ll be featured in a major storyline. The Newmans are great, but the Abbotts are just as important. Many Young and the Restless fans love to see their close bonds as well as the conflict.

Are you looking forward to the turmoil that’s looming for the Abbotts? We’ll give you updates as other Y&R news comes in. Stay tuned to the CBS soap and don’t forget to check CDL often for the latest Young and the Restless spoilers, updates, and news.