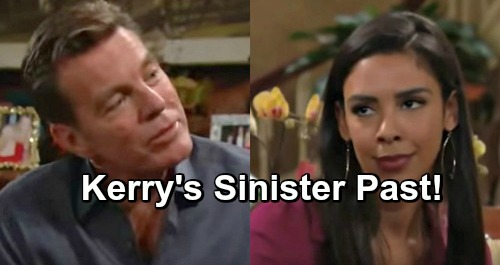 The Young and the Restless (Y&R) spoilers tease that Jack Abbott (Peter Bergman) will feel like life’s really going his way. He’s faced a few bumps in the road with Kerry, but she’s finally on board with a romance. Jack and Kerry Johnson (Alice Hunter) will grow closer over the next couple months. Everything will seem fine, but secrets will be lurking just under the surface of this new relationship.

It turns out there’s another side to Kerry’s story. She’s always pretty cagey when it comes to opening up about her past. Kerry has revealed some tidbits here and there, but nothing major. That’s particularly true when it comes to her romantic history. Kerry has alluded to just never finding the one, but there may be more to it than that. What’s Kerry hiding and how will it affect things with Jack?

There are two ways Y&R could take this storyline. When someone’s got a secret, it usually boils down to one of two reasons. Whatever Kerry’s keeping under wraps is either painful or could make her look bad. If Kerry’s hiding something sympathetic, that’s no problem. Jack can simply learn the truth and shower her with reassurance in this new romance.

Of course, that would also be the least dramatic route. If Y&R wants to put Jack and Kerry to the test, they’ll have to do better than that. As a result, The Young and the Restless may take Kerry in a shadier direction. Since Kerry’s so guarded, it’d be easy to say she’s running from her past.

Then again, who’s to say Kerry has even turned from her potentially shady ways? She was hesitant to get involved with Jack at first, but was she truly on the fence or playing hard to get? Maybe Jack is a pawn in some game Kerry’s playing. Many Y&R viewers feel like Kerry may have an agenda of some sort. It’s not out of the question since Jack is kind of an odd match for her.

Kerry’s a young, attractive woman who’s found success in the corporate world. She could score an equally young, attractive and successful man. Why is she dating Jack, who’s old enough to be her father? Many people have thriving romances with large age differences in real life, but it’s suspicious in soap land.

Plus, big changes are happening behind the scenes and that means some characters will have to be written out. If Kerry doesn’t survive the casting cuts, leaning her in this shady direction would create a simple exit. If Kerry is conning Jack somehow, her secret could all blow up and leave Jack heartbroken. Perhaps that could pave the way for a Jack and Phyllis Summers (Gina Tognoni) reunion.