The Young and the Restless Spoilers: Wednesday, January 2 – Angry Abby Confronts Mariah – Kyle and Fen Face Off Over Lola 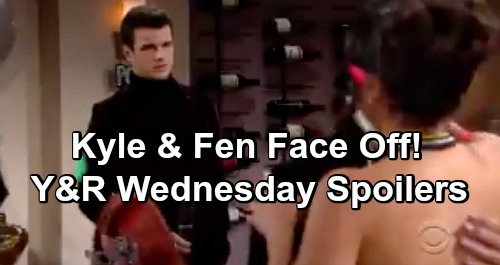 The Young and the Restless (Y&R) spoilers for Wednesday, January 2, tease that Mariah Copeland (Camryn Grimes) will face some tough tasks. For starters, her job will interfere with the secrets she’s keeping. Mariah knows Nikki Newman (Melody Thomas Scott) struck the blow that killed J.T. Hellstrom (Thad Luckinbill). She also knows her own mother played a role in the cover-up that followed.

However, Mariah has promised her silence and that means Rey Rosales (Jordi Vilasuso) won’t be hearing the truth from her. Nikki, Sharon Newman (Sharon Case), Victoria Newman (Amelia Heinle) and Phyllis Summers (Gina Tognoni) can take comfort in that. Still, Mariah’s next interview with Rey should bring some nerve-wracking moments.

It looks like Mariah will interview Rey about the murder investigation. Since Victor is charged with J.T.’s murder on Tuesday’s Y&R episode, January 1, it makes sense that it’ll be a hot GC Buzz topic on Wednesday.

Once Mariah wraps up this tortuous chat, she’ll have a run-in with Abby Newman (Melissa Ordway). The Young and the Restless spoilers say Abby will have a big problem with Mariah, so she’ll want to get it off her chest.

For some reason, Abby’s been MIA throughout most of the Newman clan’s latest issues. She’s complained about feeling like an outsider in her own family before, but perhaps she’s partially to blame.

Abby really should’ve been supporting Victoria and Nick Newman (Joshua Morrow) throughout Nikki’s ordeal. If you want to be treated like part of the fam, you need to step up in times of crisis.

Of course, maybe Abby will suddenly care now that Daddy’s involved! Victor could be the reason for Abby’s next showdown with Mariah. If she doesn’t approve of how Mariah handles the interview, that might spark the upcoming confrontation. Regardless, Mariah will have to unload her frustration to Tessa Porter (Cait Fairbanks) at the end of this grueling day.

Meanwhile, Kyle Abbott (Michael Mealor) will hope to secure another chance. He’s already fallen hard for Lola Rosales (Sasha Calle), so he can’t bear to lose her over a dumb handbag. Kyle will test the waters on Wednesday and try to find out if Lola has cooled off. He’ll just want to hash things out and get their relationship back on track.

Unfortunately, Fenmore “Fen” Baldwin (Zach Tinker) will create another hurdle. He’ll be equally determined to secure his shot with Lola, which won’t go over well with Kyle.

They’ll have a heated faceoff over her, but Lola will feel like they’re trying to turn her into a possession. She’ll insist that she doesn’t belong to anyone, so they both may be out of luck for now.

Finally, Cane Ashby (Daniel Goddard) and Victoria will make a pact. The Young and the Restless spoilers say they’ll take Tuesday’s kiss and put it behind them. Wednesday will bring a vow to never speak of this again, but we all know this Y&R secret is a ticking time bomb!

Are you eager to see the drama ahead for Victoria and Cane? We’ll give you updates as other Y&R news comes in. Stay tuned to the CBS soap and don’t forget to check CDL often for the latest Young and the Restless spoilers, updates and news.