The Young and the Restless Spoilers: Kyle Fears the Old Theo Will Come Roaring Back – Traci and Jack Too Trusting of Family Threat 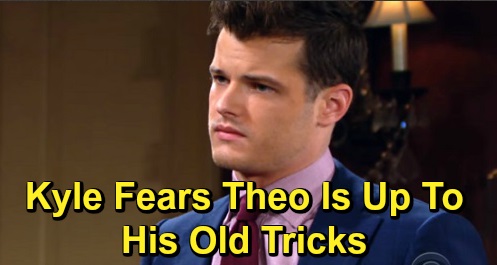 The Young and the Restless (Y&R) spoilers tease that Theo Vanderway (Tyler Johnson) will enjoy another visit at the Abbott mansion. Jack Abbott (Peter Bergman) and Traci Abbott (Beth Maitland) will welcome Theo once again, so they’ll all have another opportunity to bond. Although Jack understands the complicated history between Theo and Kyle Abbott (Michael Mealor), he as no intention of shutting Theo out.

Of course, Kyle’s already expressed concerns about Theo getting too close and hurting his family. The fact that Theo accepted Jack’s offer at Jabot intensified those fears. Kyle’s trying to give Theo a chance, but he can’t shake all the bad memories and vibes. To be fair, Theo sometimes leaves you wondering exactly what his motives are. He somehow manages to seem sincere one minute and phony the next.

Maybe that’s partially due to the confidence charade Theo’s put on for so long. As Mariah Copeland (Camryn Grimes) once pointed out, Theo clearly has some insecurities deep down. He’s trying to drop some of his walls and be real, but Kyle will worry that the old Theo’s going to come roaring back.

As Theo butters up the rest of the Abbotts and possibly achieves some success on the job, Kyle could view him as even more of a threat. These cousins are overdue for another blowup, so you can bet some conflict will erupt pretty soon. Kyle may throw his plan for second chances out the window and decide he has to get rid of Theo instead.

Lola Abbott (Sasha Calle) obviously wouldn’t be too happy to hear about a plan like that, so this could set up some secrets and emotional distance. Will Kyle’s attempt to push Theo out of the picture backfire? Will he push Lola straight into Theo’s arms instead? Theo definitely has his eye on Lola, so he’ll be ready and waiting if Kyle goes too far.

The Young and the Restless spoilers say this Y&R storyline is finally building somewhere. Will Summer Newman (Hunter King) support Kyle as his concerns grow? Will Lola be firmly on “Team Theo” and perhaps land in his bed?