The Young and the Restless Spoilers: Kyle Rocked by Jack’s Major Jabot Overhaul – Theo’s New Role, Lauren Gets Back in the Action

BY Heather Hughes on November 20, 2019 | Comments: one comment
Related : Soap Opera, Spoiler, Television, The Young and the Restless 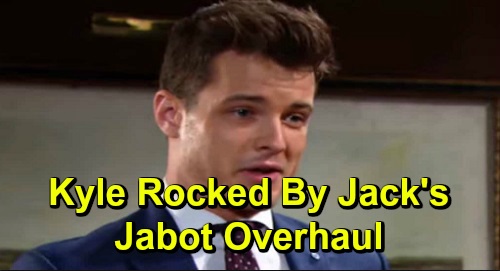 The Young and the Restless (Y&R) spoilers tease that Kyle Abbott (Michael Mealor) will face good news and bad news…and bad news and better-than-nothing news. If that sounds like a lot for Kyle to take it, that’s because it will be! Some major shakeups are brewing at Jabot, so Kyle will have plenty to wrap his head around.

For starters, Kyle will be pleased to learn Theo Vanderway (Tyler Johnson) has accepted Ashley Abbott’s (Eileen Davidson) offer and his moving to Paris. Although he recently decided to give Theo a chance, this decision will let Kyle breathe a huge sigh of relief. Theo really gets under Kyle’s skin, so Kyle will be happy to know his problem will be on a flight to France soon.

Of course, it’s never a great idea to celebrate in Genoa City before something is a done deal. It turns out Theo will be sticking around after all. The Young and the Restless spoilers say Jack will convince Theo to remain in GC and run the social media department at Jabot. That’s the first round of bad news we mentioned.

Kyle will get another round of it when he learns he won’t be promoted to CEO. After battling it out with Billy Abbott (Jason Thompson) for a while now, Jack’s updates will sting a bit. However, part of Kyle will like knowing that his dad’s reclaiming the CEO spot. Jack is still vibrant and full of ideas. There’s no reason he shouldn’t resume his seat at the top after that Abbott family history book’s done.

Since Billy’s resigning from Jabot, that’s another reason for Jack to return to the office. The Jabot shakeups will continue as Summer Newman (Hunter King) becomes head of marketing, but what about Kyle? That brings us to that better-than-nothing news. It also brings us to a character who’s been neglected for a while and deserves to get back in the action.

The Young and the Restless spoilers say Kyle and Lauren Baldwin (Tracey E. Bregman) will serve as co-COOs. Kyle would undoubtedly prefer a little more power and certainly won’t like working around Theo, but co-COO is still a pretty sweet gig – especially at Kyle’s age. He’s worked his way up quickly, so he really has nothing to complain about.

As for Lauren, it’s nice to see her name in Y&R spoilers again! Lauren has dropped off the map lately, so this is a fantastic opportunity to give her something to do. Kyle could find himself clashing with Lauren if he’s not careful. Billy was on a power trip, but Kyle could still stand to take his ambition down a peg and respect the knowledge of people with more experience than him.