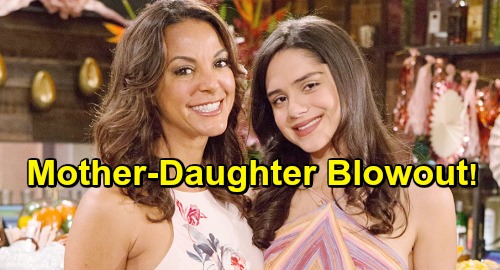 The Young and the Restless (Y&R) spoilers tease that Celeste Rosales (Eva LaRue) will become more involved in her daughter’s wedding plans.

Kyle Abbott’s (Michael Mealor) hoping to give Lola Rosales (Sasha Calle) her dream nuptials, but Celeste’s dream will take center stage instead. She’ll have plenty of ideas – and most of them won’t be at all what Kyle and Lola had in mind.

Lola’s mainly focused on marrying the man she loves anyway, so Celeste’s nitpicking and critical suggestions won’t be appreciated. Y&R spoilers say Lola will try to handle this tricky situation with care.

Wedding Is Lola Rosale’s Big Day, Not Her Mother’s

She loves Celeste and hasn’t seen in her in a while, so she won’t want to rock the boat. Creating unnecessary family drama isn’t what Lola has in mind right before her wedding.

At the same time, Lola won’t want Celeste to walk all over her. This is Lola’s big day, not her mom’s. As Celeste continues to overstep and pile on the pressure, Lola will decide she’s had enough. She’ll go off in a big way, so Celeste will face quite an outburst. Lola will make it crystal clear that Celeste needs to back off and let her do her own thing.

The Young and the Restless spoilers say some old issues could come rushing to the surface. After their father bailed, Rey Rosales (Jordi Vilasuso) stepped up as a big brother-dad hybrid to Lola and Arturo Rosales (Jason Canela). Rey harping on them to do their homework and being a bit too strict at times won’t help matters.

Where Was Celeste Rosales When Her Daughter Was Dying?

Why wasn’t Celeste the one stepping up? Come to think of it, where was Celeste when her daughter was dying and in desperate need of a liver donor? It’d be nice if The Young and the Restless could address these factors in their relationship.

Celeste is a meddler, but that’s apparently only when it’s convenient. Lola’s dad abandoned her in one way, but Celeste seemingly abandoned her in another. Emotional distance and buried tension should be driving some of this wedding conflict. The friction will surely run deeper than just Lola and Kyle’s plans to tie the knot.