The Young and the Restless Spoilers: Week of July 15 Update – Cane and Traci’s Hotel Room Fun – Adam Crashes and Burns with Christian

BY Heather Hughes on July 12, 2019 | Comments: one comment
Related : Soap Opera, Spoiler, Television, The Young and the Restless 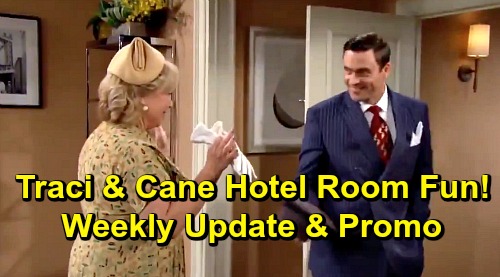 The Young and the Restless (Y&R) spoilers update for the week of July 15-19 tease that some bombshells are brewing. For starters, Cane Ashby (Daniel Goddard) will catch Jill Atkinson (Jess Walton) off guard. Jill will join Cane at Society and most likely expect an evening of moping. She may prepare for a pity party and hope she can give Cane some encouragement.

That could lead to the shocking realization that Cane’s doing just fine. He’ll be upbeat and animated as he gushes over Traci Abbott’s (Beth Maitland) new book. Cane will insist Traci’s novel is suspenseful, entertaining, funny and romantic. He’ll think it’s everything you could want in a book, but Jill will just be glad Cane’s not off crying in a corner.

Of course, this should lead to a conversation about Traci and Cane’s little-bit-more-than friendship. Jill may push for details, but this is all new and overwhelming for both of them. They’re probably still trying to wrap their heads around it at this point. Cane and Traci aren’t sure where this is going, but they definitely want to find out.

Y&R fans know Traci mentioned heading back to New York soon. She has some book matters to take care of, and Cane happens to have a seminar in New York scheduled for the same time. It looks like they’ll indeed meet up there like they planned.

The Young and the Restless spoilers say Cane and Traci will have some fun in a hotel room, but we’re not talking about THAT kind of fun – not yet anyway! Traci and Cane will don the costumes that Velma (Beth Maitland) and Flynn (Daniel Goddard) wore in the fantasy scenes. They’ll have a good laugh about stepping back in time and grow closer in the process.

Could things take a steamy turn after that? Will Cane and Traci hit the sheets? Y&R could let “Trane” chug right along or they may let them hold off on that step. Regardless, Traci and Cane will have a blast as they hang out and open up to each other.

Over with Sharon Newman (Sharon Case), she’ll decide all the Adam Newman (Mark Grossman) naysayers are right. Sharon will unleash her wrath on Adam and let Rey Rosales (Jordi Vilasuso) know she’s sorry for trusting her ex. She’ll hope it’s not too late to repair the damage with Rey, so they’ll make amends and look to the future.

Adam will also want to spend time with Christian Newman (Jude and Ozzy McGuigen) this week. Nick Newman (Joshua Morrow) suggested that if Adam really had Christian’s best interests at hearts, he’d be trying to get to know him. Adam will do just that, but – surprise, surprise – that won’t work for Nick either. When it comes to Adam, he really can’t do anything that pleases the people of Genoa City.

Of course, Devon will likely just want to acknowledge that this is a romantic step and not one of convenience. Elena moved in to help care for Jett Slade (Glenn Gilbert Brown), but she’s staying because she’s falling hard for Devon. They’ll talk about where they stand and keep their relationship moving in a positive direction.